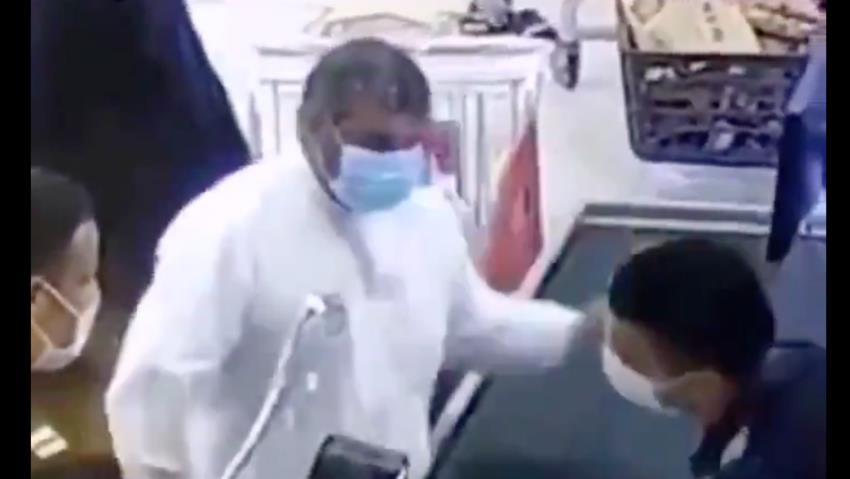 A Kuwaiti man has been arrested for slapping an Egyptian expat worker in the Gulf country where anti-expat sentiment is very becoming increasingly alarming.
The man, The New Arab reports, was filmed slapping the Egyptian cashier on the face at least three times, as a woman tried to intervene to stop the assault.
The Gulf country according to Egyptian authorities arrested the suspect. Egypt’s ministry of immigration and Egyptian affairs took charge of the incident and demanded the account.
“Nabila Makram Abdel-Shahid, minister of state for immigration and Egyptian affairs abroad, contacted Ambassador Hisham Asran, consul general of Egypt in Kuwait, to follow up the position of the Egyptian who was assaulted by a citizen at work,” the ministry said.
“During the call, Ambassador Hisham Assran stressed that the incident is an individual and does not represent the strength of the bilateral relations between the two peoples and the stability of hundreds of thousands of Egyptian workers in the State of Kuwait.”
The Egyptian according to the Kuwaiti activists was deterred by police to lodge a complaint against the Kuwaiti man.
Egyptian workers are reportedly victims of frequent racist attacks. The latest incident came in the backdrop of increasing anti-expat sentiment in the Arab Gulf country.
In May a renowned Kuwaiti snapchat influencer was condemned for launching a racist tirade against Egyptians in the Gulf state, calling them “servants” and “hired workers”, The New Arab reports.
Reem Al-Shammari branded Egyptians in Kuwait “worst and dirtiest community” and nothing more than “servants”. She also added that the Egyptians were only “hired to serve” Kuwaiti nationals.
“You are only hired hands brought over here on contracts to serve us and then leave. Why don’t you understand this?” she said.
She went on accusing the state for making Egyptians “they are equal partners” in her home country.
In April, another Kuwaiti influencer, actress Hayat al-Fahad, 71 caused waves when she called on authorities to throw out expats amide the ongoing covid-19 pandemic in order to provide medical attention to Kuwaitis.
“We are fed up. If we fall ill, there are no hospitals.
“Why, if their countries do not want them, should we deal with them? Aren’t people supposed to leave during crises?
“We should send them out… put them in the desert. I am not against humanity, but we have reached a stage where we’re fed up.”
The oil-rich country relies on expats workers for unskilled employments such as housekeeping and laboring. Foreigners account for 80 per cent of country’s entire population.