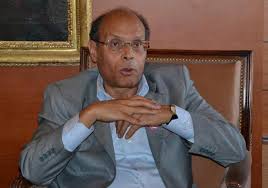 Addressing the 11th Maghreb Forum held lately in Moroccan Atlantic coastal city of El Jadida, Mr. Marzouki said: “what is happening in Libya is not only a threat to this country which is a member of the Maghreb Union, it is also a direct threat to Tunisia and Algeria, but also to Morocco”.

He stressed the importance of reviving the Arab Maghreb Union (UMA) to counter regional economic, political and security challenges.

In his recorded speech broadcast during the Maghreb forum, the ex-Tunisian President accused Saudi Arabia, the UAE and Egypt of leading a counter-revolution in North Africa by targeting Morocco, Tunisia and Algeria.

The counter-revolutionaries, he said, did not forgive Morocco’s King Mohammed VI for responding positively to the popular aspirations for change in 2011 during the Arab Spring, and for including the Islamists in the government.

Marzouki comments come as Berlin hosted an international conference on the Libyan crisis in the absence of Morocco and Tunisia.

Rabat voiced “its astonishment” over its exclusion from the conference, saying the North African Kingdom, which hosted the inter-Libyan negotiations that were crowned by the Skhirat Accords, has always been at the forefront of international efforts to resolve the Libyan crisis.

Moroccan played a decisive role in the conclusion of the Skhirat agreements, which are, to date, the only political framework for the settlement of the crisis in this brotherly Maghreb country, and that is supported by the Security Council and accepted by all Libyan parties, says the foreign ministry of the Kingdom.