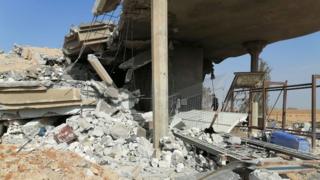 Last Friday, one US contractor was killed and several Iraqi security forces personnel were wounded in rocket attacks being blamed on Iranian-backed Hezbollah militias.

Talks with the Saudi Crown prince discussed the US defensive strikes in Iraq and Syria. The two sides agreed that the Iranian regime continues to be a destabilizing force in the region and that nations have a right to defend themselves in the face of these threats, the State Department said in a statement.

Pompeo, according to the statement, “underscored that attacks by the Iranian regime, or their proxies of any identity, that harm Americans, our allies, or our interests will be answered with a decisive response, as demonstrated yesterday (Sunday).”

The two agreed to continue to work together to continue countering Iran’s malign behavior, the statement said.

At their phone call, Pompeo and Abu Dhabi’s Crown Prince expressed deep concerns regarding Hizbollah’s attacks in Iraq, agreeing that the US actions taken in response to protect coalition interests were “defensive, proportionate and justified,” the State Department said.

Pompeo thanked the Crown Prince for the UAE’s support and engagement in many regional challenges and agreed to continue to work together to respond to Tehran’s actions.

US officials said Monday that Washington had taken “decisive action” and targeted supply depots and command centers belonging to militias it says are “Iranian proxies.” But Washington also indicated that it did not want an escalation of tensions with Iran, but a de-escalation.

Also late Monday, France condemned the series of recent attacks by armed groups against targets in Iraq belonging to the International Coalition that was formed to fight the Islamic State (IS) forces in the region.

Iran denies involvement but the US said that these attacks have increased in frequency and US airplanes on Sunday struck five targets they said belonged to the Hezbollah militia brigades. Three of the targets were hit in Iraq and two in Syria.

The French Foreign Ministry said in a subsequent statement Monday that it “presents its condolences to Iraq and to the United States” after the latest attack by armed groups. Paris also assured its Coalition partners of its “entire solidarity faced with these unacceptable attacks.”

The French statement further indicated that Paris is determined “to continue to actively participate in the Coalition against Daesh (IS),” adding that durability of the Coalition is indispensable to build on the gains achieved against IS over the past five years of conflict.
The Coalition must be preserved and keep working “to assure a lasting victory against this terrorist group,” the statement affirmed.

France reaffirmed “its attachment to the stability and sovereignty of Iraq” and said it will continue to work for a de-escalation in the current context of rising tensions in Iraq and in the region.