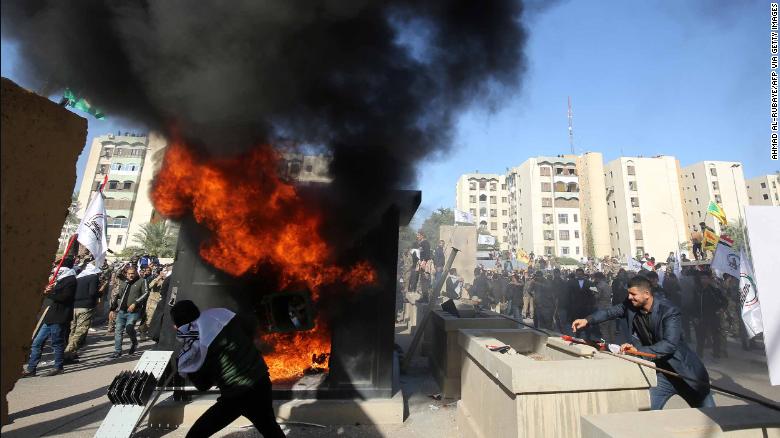 Iraqi protesters on Tuesday demonstrated in front of the US embassy in the Green Zone in Baghdad, denouncing the American airstrikes on an Iran-backed militia group in Iraq, the Popular Mobilization Forces, said the Iraqi news agency.

The protesters entered the Green Zone during the funeral of those who were killed in a recent US airstrike in Al-Qaem region, west of the country, it added.

It pointed out that several demonstrators set fire to one of the US embassy protection towers.

Protesters scaled the walls and forced the gates of the compound, the US biggest embassy in the world.

For its part, the Iraqi government remained silent about what was happening at the embassy, and the security forces did not comment on the incident.

Sunday, the Pentagon announced that it had carried out “precise defensive strikes” against the facilities of the “Hezbollah Brigades” in Iraq and Syria in response to attacks on Iraqi bases hosting the international coalition forces against the Islamic State (IS).

One US contractor was killed and several Iraqi security forces personnel were wounded in these rocket attacks being blamed on Iranian-backed Hezbollah militias.