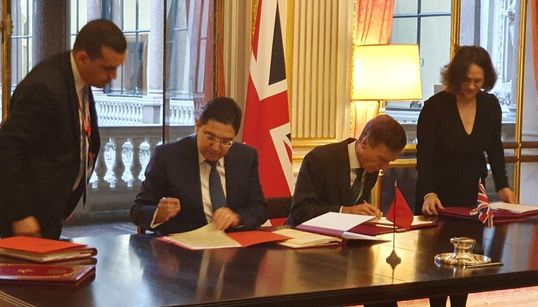 As the United Kingdom is about to exit from the European Union (EU), it seeks to secure trade with other countries. In this connection, it signed Saturday with Morocco an association agreement that will ensure British businesses and consumers benefit from continued access to the Moroccan market after the UK leaves the EU.

The UK-Morocco Association Agreement replicates the effects of the existing trade and non-trade provisions as far as possible.

The two countries have also signed a political declaration, in addition to an exchange of letters on an understanding on dispute settlement and a mutual agreement on the access of all the Moroccan products, including those from the Moroccan Sahara region, to the UK market.

Importantly, the Agreement will give exporters and consumers the certainty they need to continue trading freely and in confidence as the UK prepares to leave the EU, he said, adding that the accord provides, among other trade benefits, tariff-free trade of industrial products together with liberalization of trade in agricultural, agri-food and fisheries products.

In addition to growing trade, the association agreement seeks to deepen UK-Moroccan cooperation across foreign policy, economic, social and cultural ties. The Agreement provides a framework for policy dialogue and for strengthening cooperation on important issues like trade, educational and environmental matters, Minister of State for Trade Policy, Conor Burns on his part said.
The Agreement sends a strong signal that Britain is committed to a close bilateral relationship with Morocco and will continue to play a positive role in the region, he added.
These agreements will ensure continuity in economic relations and trading if the UK leaves the EU and further develop relations between the two countries, Foreign Minister Nasser Bourita, who signed the accords on Morocco’s behalf, said.

The accords will ensure a smooth transition, which maintains the fluidity of exchanges and ensures their security and will as well upgrade the relationship between the two countries’ complementary economies, he pointed out.

These various documents aim to deepen and develop exchanges between the two countries, particularly in economic matters. In 2018, trade reached 18.403 million dirhams, making Morocco the 7th largest export market in the United Kingdom.

British Ambassador to Morocco, Thomas Reilly, expressed hope that the association Agreement will usher in a new phase of increased bilateral investment in each other’s economies, which is so essential for continued stable economic growth.

This Agreement will be subject to domestic parliamentary procedures in both the UK and Morocco before it is brought into force.