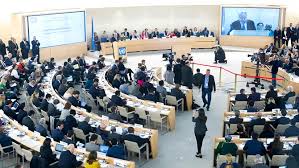 Several countries, including the member countries of the Gulf cooperation Council, voiced on Tuesday, at the UN Human Rights Council gathering in Geneva, full support to Morocco’s autonomy plan for the Sahara and reiterated strong backing to the country’s territorial integrity.

Addressing the 42nd meeting of the UN rights body, Morocco’s permanent representative to the UN in Geneva Omar Zniber read out a statement signed by a group of 22 countries that welcomed the autonomy initiative offered by the North African Kingdom for the resolution of the Sahara regional conflict, saying this plan has been recognized by the Security Council as a serious and credible basis for reaching an enduring solution of this artificial dispute.

In their joint statement, these countries say they are convinced that the resolution of this conflict will contribute to the fulfillment of the legitimate aspirations of the African and Arab peoples for integration and development, to which Morocco is strongly committed.

The signatory countries recall the Security Council’s strong backing to the initiatives taken by Morocco to promote human rights in the Sahara, while reiterating its call for conducting a census and registration of population held in the Polisario-controlled Tindouf camps, situated in Southern Algeria.

These countries also hailed Morocco’s constructive voluntary interaction with the UN human rights system, in particular the Office of High Commissioner for Human Rights (OHCHR) and the special procedures of HRC which visited several times Moroccan southern cities of Laayoune and Dakhla, where the UN human rights experts met freely with all actors, including representatives of local civil society.

The joint statement points out that the Sahara issue is in the hands of the UN Security Council which is making efforts with a view to finding a mutually acceptable negotiated political solution, stressing the exclusive role of the UN in this regard.