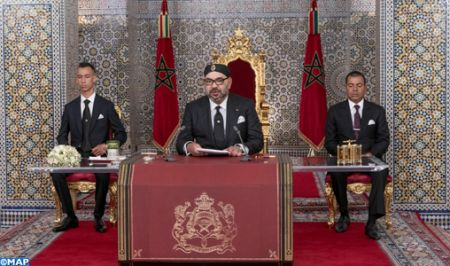 The Throne Day speech delivered Monday evening by King Mohammed focused on Morocco’s development model and on economic reforms that the Monarch wants to improve and make more effective.

“Today, our resolve is greater than ever to press ahead with our efforts, to build on our achievements, to continue the reform process and to address the shortcomings revealed by past experience,” the King said in the Throne Day speech, marking this year the 20th anniversary of his enthronement.

Surveying the kingdom’s achievements, he said a quantum leap was made in infrastructure development, whether it is highway construction, the high-speed railway, major ports, renewable energy facilities or urban development.

In parallel, undeniable progress was scored in promoting rights and freedoms and consolidating sound democratic practice, he noted.

Nevertheless, he underlined, though important, infrastructure development and institutional reforms are not enough on their own.

Therefore, the King said he attaches “particular importance to human development programs, social policies, and the need to respond to Moroccans’ pressing concerns.”

He insisted that properly tackling the hurdles faced and finding the right solutions to development and social issues cannot be achieved “without a comprehensive vision, without qualified human resources or without meeting the conditions required to carry out planned projects.”

The Monarch conceded that the Moroccan development model implemented these past years has proven to be inadequate in terms of helping meet the growing needs of a segment of the population, reduce social inequalities and tackle regional disparities.

Calling for revisiting that model and updating it, King Mohammed VI announced the setting up of an ad-hoc committee for the development model that will be inaugurated in the autumn.

He made it clear that the committee will not serve as a second government or be a parallel official institution. This is an advisory body with a specific time-bound mission.

It will have to take into consideration the major reforms introduced – as well as those to come – in a number of sectors, such as education, health, agriculture, investment and taxation. The committee is expected to make suggestions on how to improve these reforms and increase effectiveness.

“I expect the committee to be totally impartial and objective, and to report on facts as they are on the ground, however harsh or painful they may be. And when proposing solutions, I want it to be daring and innovative,” he said.

This is not about a break with the past. Rather, we want to add a new building block to our development agenda, as part of a continuing process.

Most importantly, we must be resolute and audacious and show a keen spirit of responsibility as we implement the relevant conclusions and recommendations adopted, no matter how hard or costly that may be.

In the meantime, work pertaining to the management of public affairs and response to citizens’ concerns must continue with greater commitment and a keener sense of responsibility, he said, insisting that emphasis should be placed on improving basic social service delivery and enhancing the performance of public institutions.

In parallel, he urged the Government to start working on major, integrated next-generation sectoral plans, which will form the backbone of the new development model.

The King argued that revamping the nation’s development model is not an end in itself. Rather, it is a gateway to a new era… it is a new phase, whose distinguishing features will be responsibility and the pursuit of a comprehensive take-off, the ambition for Morocco being to join the ranks of developed nations.

Nevertheless, the new era we are about to enter is fraught with internal and external challenges to which we must rise. For this new phase to be successful, all national institutions and actors concerned should be involved in injecting fresh momentum into economic and social development in our country.

For the Sovereign, this requires collective mobilization and making the motto of putting the interests of the homeland and the citizens above any other consideration a concrete reality – not just a slogan.

In addition to the important role that has to be played by national institutions, the King emphasized the need for Moroccans to be involved, since the citizen is one of the most important actors in the success of this phase.

“I therefore call upon all Moroccans to make a positive contribution in keeping with a spirit of effective civic engagement. Indeed, the results we seek to achieve, the projects we implement and the initiatives we launch all have but one goal: to improve the citizens’ living conditions,” King Mohammed VI stated further.