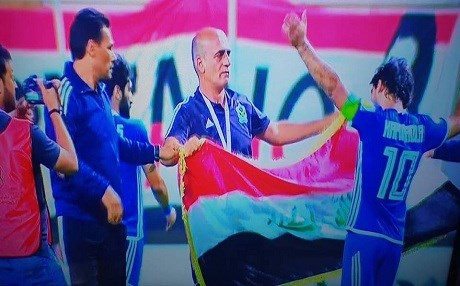 According to a statement by the Iraqi foreign ministry, videos filmed inside the stadium and posted online show Algerian supporters chanting “Allahu Akbar (God is greatest)! Saddam Hussain!”

Some “malevolent individuals” present at the game “abused the deep brotherly relations between the brotherly countries,” according to the ministry.

State media Al Iraqiyah reported that the country’s Air Force team, its delegation and fans withdrew from the match due to “sectarian chants,” which mocked Saddam Hussein’s treatment of Iraq’s Shiites.

Saddam was deposed in 2003 in a US-led military intervention.

The Middle East’s most notorious strongman of the late 20th century went to the gallows after losing an appeal against a death sentence handed down by the Iraqi High Tribunal over his role in the execution of 148 Shiite villagers in 1982.

Iraq’s football federation threatened to pull its teams out of the remainder of the competition and said it “opposed all extremist and sectarian slogans”.

“If the Arab Football Federation does not take a decision to restore… respect for Iraqi football, the Iraqi federation will withdraw its clubs”, Iraqi football federation president Abdul Khaleq Massud said in a statement.