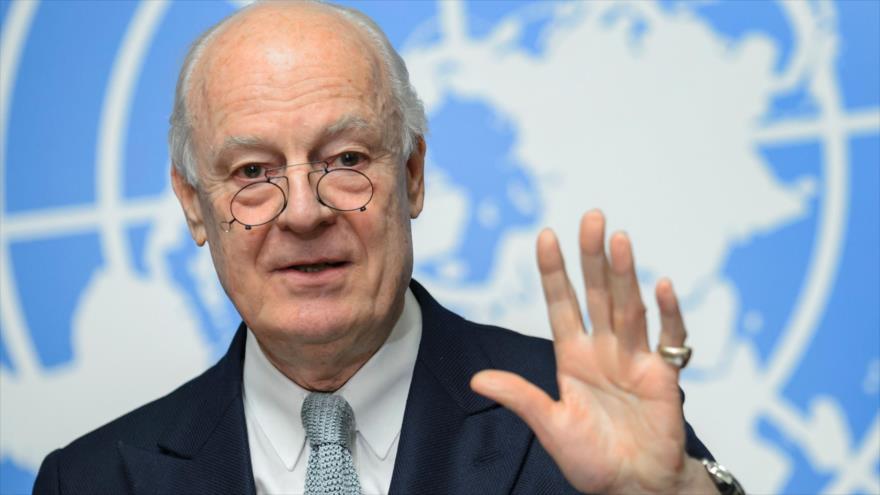 Speaking to journalists in Geneva, the UN Special Envoy for Syria offered to personally escort residents of Idlib to safety ahead of any attack on the last main opposition-held area in the country, echoing an offer to do the same in Aleppo in 2016.

The envoy’s comments reiterate an earlier appeal by UN Secretary-General António Guterres, who cautioned against a full-scale military operation and expressed deep concern over the growing risk of a “humanitarian catastrophe” in the war-torn province, which borders Turkey and is home to nearly three million people.

The fate of Idlib is important because its mainly civilian population has been displaced or evacuated from other conflict zones in the country amid territorial gains by Government forces in the more than seven-year war.

It is also the last zone in Syria that is covered by an internationally-agreed ceasefire deal, Mr. de Mistura explained, a reference to a de-escalation pact between Russia, Turkey and Iran, known as the ‘Astana guarantors’ after the Kazakh capital where the deal was struck.

“Why such a hurry and not provide more time, to allow more discussions, especially among the Astana guarantors?” he said. “They are the ones … who announced and provided the guarantees originally for this last but hugely inhabited de-escalation area.”

In the past six months alone, a reported 500,000 people have arrived in Idlib after fleeing Government offensives in Dera’a, eastern Ghouta and other opposition-held areas.

The north-western province is also the base for “an extremely high concentration of foreign fighters”, Mr. de Mistura said, noting that this amounted to approximately 10,000 Al Nusra or Al Qaeda members, who have been recognized as terrorists by the UN.

The extremists are understood to have the capability of weaponizing chlorine – as is the Government of Syria – Mr. de Mistura said, highlighting the risks of a “worst case scenario” occurring in the event of a military attack.

Although “no-one questions” the Syrian Government’s right to fight UN-identified terrorists, nor its right to recover “all of its territorial integrity”, there was “no justification” to using heavy weapons in densely populated areas, he added.

Reiterating the UN Secretary General’s statement on Wednesday, he noted that the systematic use of indiscriminate weapons in populated areas may amount to war crimes.

It would be a “tragic irony” at the end of the war inside Syria with a “most horrific tragedy” involving large numbers of civilians, Mr. de Mistura insisted, ahead of his offer to escort people away from Idlib.

His offer to do the same in Aleppo in 2016 had been rejected by Al Nusra, he reminded journalists, saying that this had led to thousands of people dying.

UN-led efforts to secure a peaceful solution to the conflict are set to continue with meetings planned in Geneva on 10 and 11 September with representatives from Russia, Turkey and Iran, Mr de Mistura said.

Those discussions are due to be followed on 14 September by encounters on constitutional matters with senior delegations from seven other Member States: Egypt, France, Germany, Jordan, Saudi Arabia, the United Kingdom and the United States.