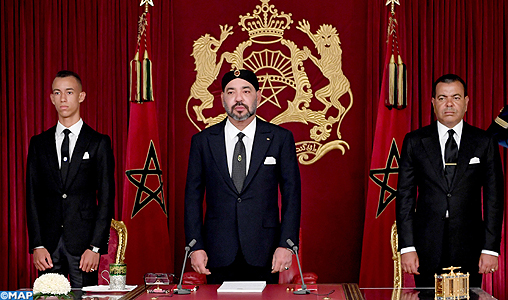 King Mohammed VI delivered Sunday an address on Throne Day from the northern city of Al Hoceima in which he stressed the need for social and economic reforms that would guarantee better living conditions for Moroccans in a climate of unity, security and stability.

From the beginning, the King made it clear that “True patriotism enhances unity and solidarity, especially in testing circumstances.”

He said hardships enhance the faith of Moroccan patriots and increase their resolve to tackle difficulties and rise to challenges.

“I am confident that Moroccans will not allow the advocates of chaos and nihilism or the peddlers of misconceptions to exploit certain deficiencies in order to encroach upon Morocco’s security and stability and belittle its gains and achievements,” the Monarch said on the occasion  of the 19th anniversay of his coming to power.

The King urged coordination and convergence between different government agencies and the multi-billion social development programs.

“We can be satisfied with and take pride in what Morocco has achieved and what Moroccans have accomplished over the last two decades. Yet, I cannot but feel that something has been missing in the social domain,” the King said.

After calling for joint action in addressing shortcomings, the King commended the new initiative to set up a “consolidated social register” as “a promising start for the gradual improvement of social welfare programs over the short and medium terms.”

In the same vein, the King called on the Government and all the stakeholders concerned to undertake an in-depth, thorough restructuring of national social welfare programs and policies and to submit proposals for their evaluation.

King Mohammed VI recommended provisional social measures to be taken by the government in the field of school enrollment programs and combating school drop-out, launching the third phase of the national initiative for human development, tackling dysfunctions in the health coverage program RAMED and facilitating social dialogue with labor unions with a view to promoting the competitiveness of Moroccan companies and the interests of workers.

The King also called for adoption of legislation that aims at facilitating investments through the simplification of administrative procedures.

“I hope these crucial measures will provide a strong, unprecedented incentive to boost investment, create job opportunities, improve the quality of services offered to citizens and reduce foot-dragging which, as all Moroccans know, leads to corruption,” the King added.

He said “the national water plan should address the various issues relating to water resources for the next 30 years.”

“Because I have keenly sought to continue with that policy, we have managed to build thirty dams of various sizes in the country during the last 18 years,” underscored the King.