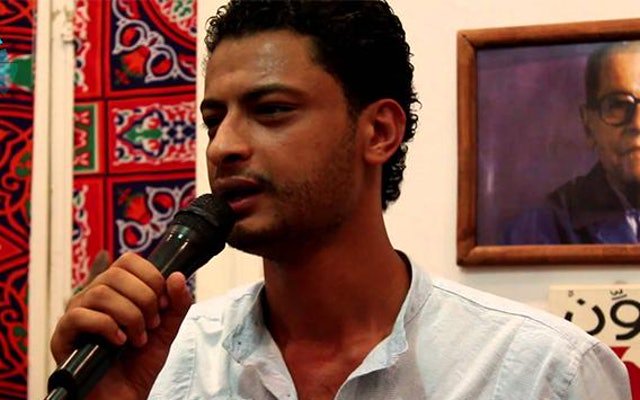 Galal El Behairy has been held in detention since February after penning a song critical of Egypt’s policies, prompting United Nations human rights experts on Thursday to urge the government to release him immediately, a UN release says.

Just five days later, El Behairy was arrested by National Security Police and detained for a week at an undisclosed location, before being charged with affiliating with terrorists, “disseminating false news, abusing social-media networks, blasphemy, contempt of religion and insulting the military” according to a statement released by six rights experts.

At the time of that first court appearance, the poet showed signs of torture and beating. His first trial in Military Court began on May 6, and after being delayed three times, sentencing is due to take place this coming Saturday. He remains in Tora Prison, in the capital Cairo.

“We are very worried at the reported criminalization of the legitimate exercise of artistic expression through the imposition of a range of dubious charges,” said the experts.

“We are alarmed at the arrest and alleged ill-treatment of El Behairy, which appear to be related solely to the peaceful exercise of his right to freedom of artistic expression and creativity,” they added.

The poet’s detention takes place against a backdrop of restrictions to artistic and other forms of expression as well as to the right to participate in the country’s cultural life.

“We have received allegations that it is increasingly common for artists, activists and journalists to be arrested and detained on charges, such as ‘publishing false news’,” said the experts.

In a separate case on similar charges, still under investigation by the High State-Security, El Behairy can be further detained for up to two years without trial.

“We urge the relevant authorities to investigate the alleged ill-treatment of Mr. El Behairy, and to acquit him of all charges related to the creative expression of his political views,” stated the rights experts.

“We recall that all individuals have the right to participate in varied information exchanges, to contribute to artistic expression, and to take part in cultural life and in the development of their society, including through political debate and expression of opinion and dissent, without fear of sanction or reprisals,” they concluded.