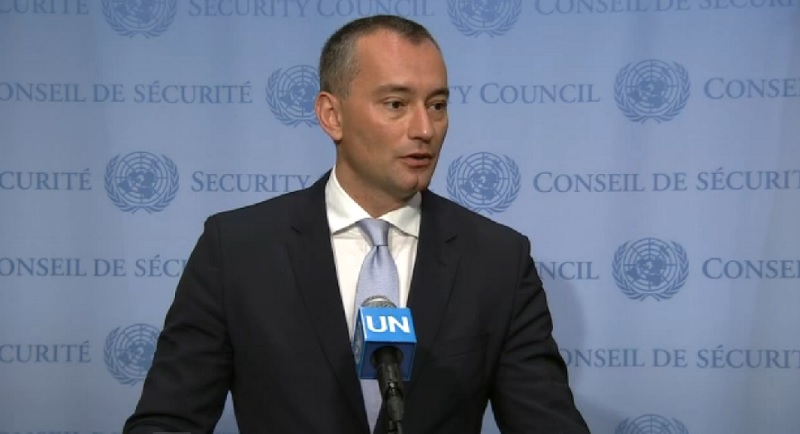 Intense diplomatic efforts by the United Nations and Egypt have helped avoid another Israeli-Palestinian war in Gaza that appeared just “minutes away” over the past weekend, a senior UN official said on Tuesday.

“After intense efforts by the United Nations and Egypt, I can report that the situation is calming down, although tensions remain,” Nickolay Mladenov, UN Special Coordinator for the Middle East peace process, told the Security Council via video link from Jerusalem.

“Last Saturday we were minutes away from another devastating confrontation between Israel and Hamas in Gaza,” he said.

The enclave bordered by Israel and the Mediterranean has been controlled by Hamas, since 2007. Israel has blocked the movements of Palestinians from Gaza.

The UN has said the root causes of the intractable conflict there include a more than 50-year occupation by Israel of the Palestinian territory; its years-long blockade of Gaza; Hamas’s continuing control of the enclave, and the division between Palestine’s two political factions, Fatah and Hamas.

Briefing the Council on recent developments around Gaza, Mladenov said that “over the last two weeks, the situation quickly spiralled out of control, nearly to a point of no-return”.

The past month, he said, has witnessed one of the largest escalations since the most recent 2014 Israel-Gaza conflict.

Nineteen Palestinians, including seven children, were killed by Israel Defense Forces (IDF) in Gaza, during protests, clashes, and airstrikes, and over 1,000 were injured.

One IDF soldier was killed by gunfire from Gaza last week, while four Israeli civilians and an IDF soldier were moderately injured, respectively, by rocket fire and a hand grenade attack.

Hamas and other militants fired 283 rockets and mortars from Gaza towards Israel, while The Israeli Air Force (IAF) fired some 189 missiles and artillery shells against targets in Gaza.

The UN Special Coordinator said he travelled to Gaza on July 15 and earlier on Tuesday (July 24), in an urgent effort to de-escalate tensions, appealing to Palestinian factions not to provoke incidents at the fence, to immediately stop the firing of rockets and mortars and to stop the incendiary kites and balloons. He appealed to Israel to fully reopen border crossings, stop shelling, particularly in populated areas, and to exercise restraint towards Gaza.

On Sunday, the UN warned that supplies of emergency fuel provided by the world body for critical facilities in Gaza are running out.

Mladenov said that on Tuesday, the first 100,000 litres of much-needed fuel were allowed through the Kerem Shalom crossing, to be distributed by the UN to hospitals and emergency services.

Briefing the Committee on the Exercise of the Inalienable Rights of the Palestinian People, the Commissioner for Human Rights, – who also heads the UN human rights office, OHCHR – expressed concern over the dramatic escalation of violence along the border between the Gaza Strip and Israel during the past few months, in which dozens of Palestinian civilians were killed.

“I remind all parties that any disproportionate or indiscriminate use of weapons which lead to the death and injury of civilians is prohibited by international humanitarian law”, said Zeid, warning that this escalation could potentially threaten peace across a far broader region.

In his briefing to the Security Council, Nickolay Mladenov also dealt with the heightened tensions on the Syrian Golan Heights after the Israeli Defense Forces reported having fired two missiles, which shot down a Syrian fighter jet that they claim had infiltrated nearly two kilometres into Israeli airspace.

“We are closely monitoring the situation,” he said.