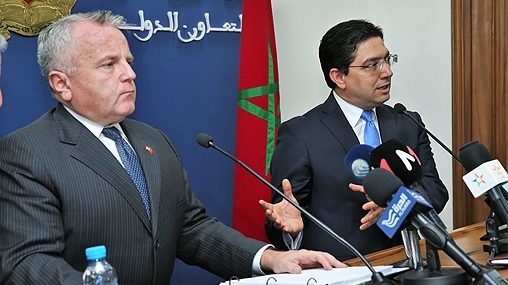 The visit made by US Deputy Secretary of State John J. Sullivan on Friday to Morocco within the frame of a regional tour was an opportunity for the US government to reiterate its stand regarding the Sahara issue.

During this trip, Sullivan met Moroccan Foreign Minister Nasser Bourita and “expressed US interest in advancing UN-led efforts to find a peaceful, sustainable, and mutually acceptable political solution” to the Sahara issue, says a press release issued by the State Department.

He also described Morocco’s autonomy plan as “serious, realistic and credible”, saying it “represents one potential approach” that could satisfy the aspirations of the Sahara people to run their own affairs in peace and dignity.

The two also discussed continuing bilateral dialogue and cooperative efforts, including meetings this year of the Strategic Energy Working Group and the Defense Consultative Committee.

The Deputy Secretary of State thanked the Moroccan government for its important role in countering terrorism and violent extremism. He also thanked the North African Kingdom for co-hosting this week, a coordination meeting of the Global Counterterrorism Forum’s Initiative to Address Homegrown Terrorism and a political directors’ meeting of the Global Coalition to Defeat ISIS.

Sullivan and Bourita also discussed opportunities to strengthen trade and investment ties between the United States and Morocco, building on the bilateral Free Trade Agreement.