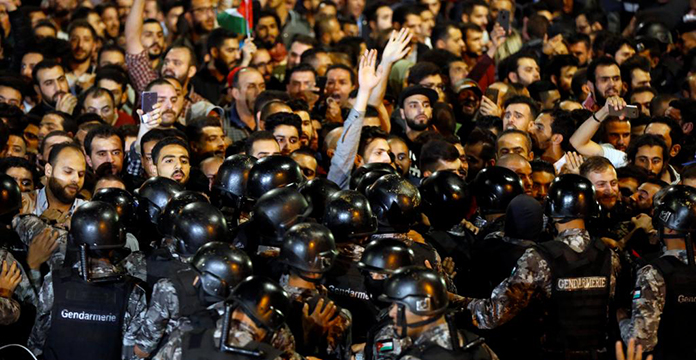 As protests continue in different parts of Jordan demanding the withdrawal of the draft text on income tax and the change of the economic system, the Jordanian government, led by Prime Minister Hani Mulqi, presented Monday his resignation to King Abdellah II.

“King Abdellah II accepted the resignation of the Hani Mulqi government,” said a statement from Jordan’s Royal Office.
On Saturday, King Abdullah II had called on the government and parliament to “conduct a comprehensive and reasonable national dialogue on the tax bill”, saying “it is unfair for the citizen to pay the consequences of tax reforms alone”.

Hani Mulqi, who has been in charge of the government since May 2016, has been the subject of popular condemnation for several days after the cabinet announced measures denounced by the population. These include a tax bill on incomes and higher fuel and electricity prices.

The protests, the largest in five years, have been taking place for several days in Amman and other cities in the kingdom.
The tax bill has been presented on the recommendations of the International Monetary Fund (IMF). It provides for an increase of at least 5% of taxes for individuals and imposes taxes on people with an annual salary of 8,000 dinars (about €9,700). Corporate taxes must increase by 20 to 40%.

The IMF approved in 2016 a $723 million line of credit over three years for the kingdom. In return, Amman pledged to implement structural reforms and gradually reduce its public debt to 77% of GDP by 2021, against 94% in 2015.

Jordan hosts  hundreds of thousands of Syrian refugees, a fact that also weighs heavily on the country’s economy.