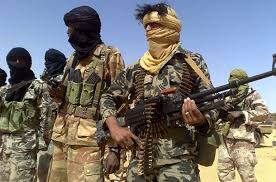 Over one hundred Malian terrorists have been arrested in Algeria and will be deported to Bamako, confirming the reports of several intelligence services that southern Algeria is becoming a dangerous safe haven for terrorist and separatist groups in the region.

On Monday, local daily El Watan quoted a security source as saying that the Algerian authorities were preparing to “expel 105 Malian terrorists who have been arrested, tried and sentenced by courts for acts related to terrorist activities”.

The jihadists, including members of the terrorist group Ansar Eddine, were arrested in the south of the country. They were part of a large network tasked with setting up a rear-base in Algeria for armed groups active in northern Mali.

Notorious terrorists wanted for their criminal activities in the Sahel region were among the arrested jihadists, said the Algerian newspaper.

The dismantling of this jihadist network was made possible thanks to the tips provided by “repentant terrorists” who operated in northern Mali and who surrendered to authorities, El Watan notes, adding that impressive quantities of weapons, ammunition and explosives have been recovered by the army.