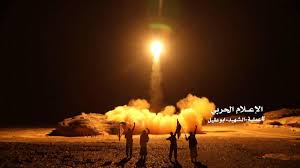 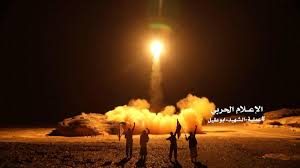 Saudi air defense force intercepted a ballistic missile that was launched from Yemen towards the city of Najran on Friday, a day after Iran-backed Houthi rebels suffered heavy losses.

The Royal Saudi Air Defense Forces of the coalition (RSADF) detected the launch of a ballistic missile launched by Iran’s Al-Houthi militia from within Yemeni territories (Omran Province) towards the Kingdom’s territories, the official spokesman of the Coalition Forces Command Colonel Turki Al-Malki said in a statement released by the Saudi Press Agency.

Debris from the intercepted missile fell on populated areas of Najran but did not cause any injuries, Colonel Al Malki said.
Colonel Al-Malki further said that this hostile action by Iran’s terrorist Al-Houthi militia proves the continuing involvement of the Iranian regime in support of Al-Houthi armed militia with qualitative capabilities. He said this is a clear and explicit defiance of UN resolutions (2216 and 2231) in order to threaten the security of Saudi Arabia as well as regional and international security. Launching ballistic missiles towards densely populated cities and villages is contrary to the international humanitarian law, he said.

In a related development, UAE daily The National reported that on Thursday, more than 70 Houthi fighters were killed in Yemen’s Hodeidah province as government troops backed by the UAE Armed Forces cut off a rebel supply line, reported the.

On Friday morning, jets from the Arab Coalition supporting the government launched air strikes at Houthi reinforcements heading towards Zabeed, a military source in Al Tuhaiyta told The National.