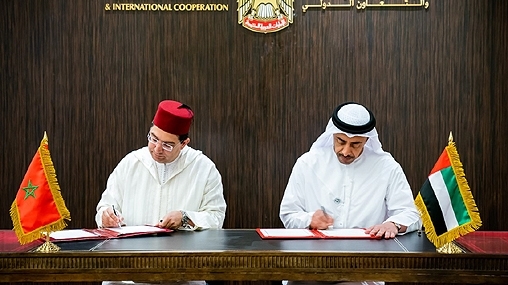 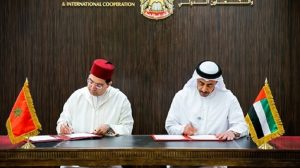 Morocco and United Arab Emirates (UAE) are determined to enhance, expand and deepen further their strategic and close partnership based upon common goals, interests, and values.

The Moroccan-UAE commission meeting comes after the North African Kingdom’s decision to sever diplomatic relations with Iran over Tehran’s military support to the Polisario separatist group through its Lebanese Shi’ite ally, Hezbollah.

Held under the co-chairmanship of the Moroccan a,d Emirati Foreign Ministers Nasser Bourita and Sheikh Abdullah Bin Zayed Al Nahyan, the Abu Dhabi meeting was an opportunity for the oil-rich gulf country to renew its support to Morocco’s territorial integrity and sovereignty over its Sahara.

“We are reaffirming our consistent support for Morocco’s Autonomy Plan for Sahara, and we back all measures taken by Morocco to address any threats to its territorial integrity”, Sheikh Abdullah said.

“We condemn all foreign interferences in the internal affairs of Arab countries, primarily Iran’s meddling into the region, and reiterate UAE’s support for all measures taken by Morocco in this concern over the past period,” he added.

Abu Dhabi also condemned the terrorist activities of Hezbollah and Polisario and their plots hatched to undermine Morocco’s security, stability and territorial integrity.

The UAE leader also hailed the role played by King Mohammed VI in consolidating sustainable development and strengthening peace, security and stability in the African continent.

UAE is one of the major investors in Morocco. Non-oil trade exchange between the two countries increased from $464 million in 2013 to $524 million in 2017.

According to latest economic statistics, the 2016-2017 annual trade growth rate stands at 9 percent, or threefold of its equivalent over the past five years, which leaves the business community upbeat over the Moroccan-Emirati cooperation and trade exchanges expected to soar to higher levels due to the huge potentials of the two countries’ economies.