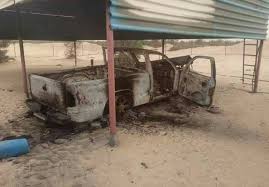 Forces belonging to Khalifa Haftar’s Libyan National Army (LNA) Tuesday lost two fighters after their position, near a checkpoint, suffered a car bombing attack in the east of the country.

The attack that took place near a checkpoint 60km outside the town of Ajdabiya left two soldiers killed and another abducted, Libya Express reports.

The victims died after the car blew up. 152 Battalion of the LNA was manning the checkpoint.

No group has claimed responsibility of the attack, the media noted.

The same checkpoint came under an attack staged by the Islamic State group (ISIS) in March. Three fighters under Haftar’s command perished.
Haftar forces control much of the eastern part of the country. Last year, Haftar claimed the liberation of Benghazi and much of its surroundings after three-years of fierce fighting against extremists.

This week, the LNA advanced on villages four kilometers from the far eastern port city of Derna, the last major bastion of opposition to the army in the east of the country. The troops, supported by air strikes and artillery, are targeting a coalition of extremists and rebel veterans known as the Derna Mujahideen Shura Council.

Commander of the army, Khalifa Haftar, said at a news conference this Wednesday, “The army will keep fighting until it takes the city of Derna from the terrorists and those who carry weapons against the LNA”.

He said the LNA will intensify its offensive on the city of Derna until it has full control of the area. He urged Derna’s residents to stand by the army and called on those who joined “the terrorists to turn themselves in”.