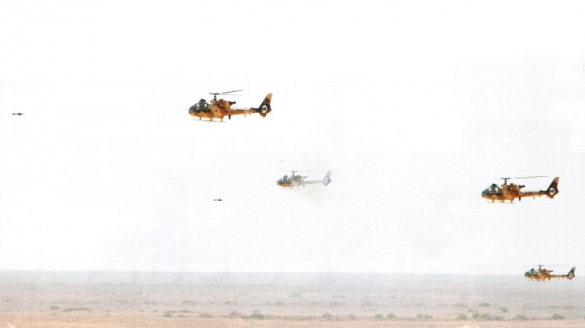 The Moroccan army has carried out lately a military exercise, sending a clear message to the Polisario separatists, who are armed, sheltered and financed by Algeria.

According to Moroccan web site Medias24.com, the exercise, dubbed “Tafilalet 2018”, took place March 22 -April 7 in the Errachidia Southern zone. It tested the responsiveness, the planning and the interoperability of the ground, air and special forces to a simulated hostile attack beyond the Moroccan defense wall. The goal of the drills is to flush out the enemy and defend the country’s borders.

These war games were held amid heightened tensions following the Polisario repeated incursions in the buffer zone, east of Morocco’s security wall. The demilitarized buffer area was handed by Morocco to the MINURSO, entrusted with monitoring the ceasefire, under the UN-brokered agreements of 1991.

The separatist front unveiled plans to transfer its military staff to Tifariti in the demilitarized zone.

In its resolution 2414 adopted last month, the Security Council condemned the Polisario’s provocations, expressed concern over the presence of the Polisario Front in the buffer strip and called for “its immediate withdrawal.”

After the firmness showed by the Security Council, which denounced the Polisario’s destabilizing acts in the buffer strip in the Sahara, the separatist group pulled out its armed militia from Guergarat.

However, the Polisario group proved to be untrustworthy as it has resumed its provocative actions in Tifariti, to the east of the Moroccan defense berm.

In blatant violation of UN agreements, the Algeria-backed militia organized military parades and drills in the locality of Tifarity.

“The Kingdom of Morocco considers this provocation a new and serious violation of the ceasefire and a blatant challenge to the authority of the Security Council,” said the Foreign Ministry in a statement.

“Morocco, which has officially alerted the President and the members of the Security Council, the Secretary-General of the United Nations and MINURSO, has asked them to assume their responsibilities and to take the necessary measures against these unacceptable actions,” added the statement.

UN chief António Guterres warned on Saturday that no action should be taken that “may constitute a change to the status quo” on the ground.

“The Secretary-General is closely following the developments in the Sahara. In accordance with Security Council Resolution 2414 adopted on 27 April 2018, and in order to maintain an environment conducive to the resumption of dialogue under the auspices of his Personal Envoy Horst Köhler, the Secretary-General calls for maximum restraint,” a statement issued by the UN Chief’s Spokesman Stéphane Dujarric, said.