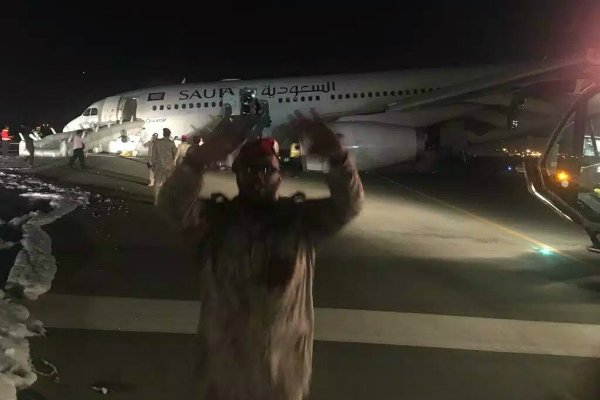 A flight of the national flag carrier Saudia made Monday an emergency landing in Jeddah after the pilot failed to correct a malfunction that reports say forced the aircraft to land without its front wheels.

The Airbus A330-200, which had left Medina bound for Dhaka, stopped its journey and landed in Jeddah.

The aircraft skidded along the runway as the pilot tried to land it. It landed with the nose gear retracted, Gulf Business reports citing an official.

The kingdom’s Aviation Investigations Bureau (AIB) indicated that the incident was caused by a hydraulic malfunction with the plane’s nose landing gear. The landing caused sparks underneath the aircraft.

There were 141 passengers and 10 crew members on board the aircraft leased from low-cost Turkish airline Onur Air. They were attended to by rescue teams while fire fighters tried to put off the sparks.

The incident is the second plane-related misfortune in this month for the Saudi aviation. A light aircraft belonging to the kingdom’s wild life Authority crashed north of the country early last week killing all the people onboard.

The plane according to the AIB crashed in Tabuk region.