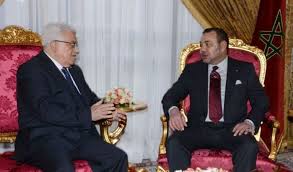 King Mohammed VI, chairperson of Al Quds Committee of the Organization of Islamic Cooperation, has warned the international community against the dangerous fallout of the decision of US president Donald Trump to recognize Al Quds as capital of Israel and move its embassy to this city.

In a message addressed to Palestinian President Mahmoud Abbas, King Mohammed VI voiced deep concern over the implementation of the US administration’s risky move to botch the possibility of achieving a just, comprehensive settlement of the Palestinian-Israeli conflict.

The Moroccan Monarch recalled the messages he sent to President Trump and to UN Chief Antonio Guterres, explaining the importance of the city of Al Quds not only for the parties to the conflict, but also for the followers of the three monotheistic religions, and warning that any infringement to the legal and historical status of Al Quds could toss the Palestinian issue into the quagmire of religious conflicts.

The Moroccan Sovereign called for halting any action that could alter Al Quds’ established political status because the Holy city is at the heart of issues of the Final Status.

King Mohammed VI pledged to continue his efforts and contacts with influential powers urging them to uphold the international law and UN resolutions, stressing the need to preserve the legal status of the holy city and its identity as a model of coexistence between the followers of the three revealed religions.

The Al Quds Committee chairperson expressed commitment to continue working with the US administration for a balanced stand that would restore trust and revive the peace process between Palestinians and Israelis.

The Moroccan Sovereign also vowed to endeavor for the mobilization of the international community to defend the legitimate rights of the Palestinians to the establishment of an independent state with eastern Al Quds as capital, on the basis of the two-state solution seeking a just, lasting and comprehensive peace in the Middle East.

During US presidential election campaign, Donald Trump pledged that, if elected, he “will move the American Embassy to Jerusalem.” And this is what he announced last December and enacted this May 14.