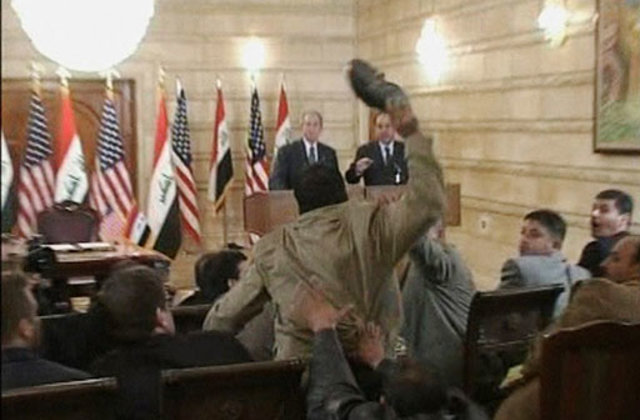 Former TV journalist who made world news after throwing his shoes at former US President Georges Bush has announced he is running for May 12 parliamentary elections, saying he seeks to stamp out corruption and end presence of foreign forces in Iraq.

Muntadhar Al-Zaidi willy-nilly made a name for himself in 2008 after throwing his shoes at then US President Bush during a press conference with then Iraqi Premier Nouri al Maliki.

Zaidi, who spent 9 months in prison for the offense, is aiming, a decade on, at playing a political role in corruption-plagued Iraq influenced by foreign forces namely the United States and Iran.

Zaidi is running under the banner of Sairoun Alliance, a coalition headed by Muqtada al-Sadr; a powerful Iraqi Shia cleric opposed to foreign troops’ presence in the country.

US forces have been in Iraq since 2003. Iran also holds a sway over Prime Minister Haider al-Abadi’s government through Tehran’s support for the fight against the Islamic State group (IS) which was defeated in December last year.

“For the last 10 years, I have been writing about corruption and corrupted people. I have been trying to expose public theft and I couldn’t change anything on the ground,” he told Middle East Monitor (MEMO) in an interview.

“So, I decided to go into politics to work from within the system to issue new laws and regulations, and to expose corrupt politicians and officials. This is the reason I decided to run now for parliament.”

Sadr’s loyalist army has fought US forces (9,000) whom they want out. Likewise, the Shia cleric has positioned himself an opponent of Iran’s influence. He has forged ties with Riyadh, Tehran’s arch enemy, after meeting with Saudi Crown Prince Mohamed bin Salam last year.

“America and Iran are the reasons for the tension in Iraq,” Zaidi noted.

“We have American troops under the name of ‘consultants’ – we don’t accept their presence in Iraq.”

The plight of journalists is also at the heart of Zaidi who also sees himself an advocate of press workers in a country, ranked as one of the worst countries in the world for journalists to work in.

Iraq recorded 155 deaths of journalists in 2006. There has been no fatality in 2018 though the country is still a dangerous ground for the profession.

“One of my missions going to the parliament is to set laws to protect journalists from oppression and guarantee their freedom of speech,” he pledged.