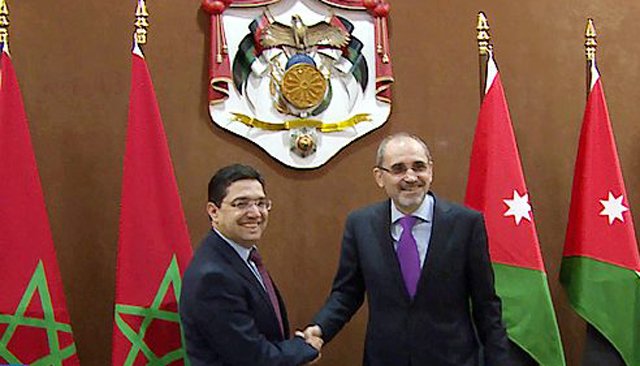 Jordan reaffirmed on Wednesday its support for the Moroccan identity of the Sahara and for the Morocco-proposed autonomy initiative.

This came during the talks held, in Amman, by Minister of Foreign Affairs Nasser Bourita with his Jordanian counterpart Aymane Safadi.

“We have reaffirmed our unwavering position in support of the Moroccan identity of the Sahara and the need to back the autonomy initiative in accordance with the decisions of international law,” underlined Safadi during a joint press briefing with Bourita.

Nasser Bourita visited Amman coming from Ramallah where he discussed on Tuesday with Palestinian President Mahmoud Abbas the latest developments in the Palestinian territories, in light of the arbitrary Israeli measures and the US unfair decisions against the Palestinian cause, including the unilateral recognition of the city of Al Quds as the Israeli capital, that brought the political process to a deadlock.

During this meeting, the Palestinian President commended the support given by King Mohammed VI as well as by the Moroccan government and people to the Palestinian people’s fair cause, on top of which the protection of the status of Al Quds.

President Abbas also underscored the key role played by Al Quds Committee, chaired by the Moroccan Sovereign, and by Bayt Mal Al-Quds, which support flagship projects in the holy city.