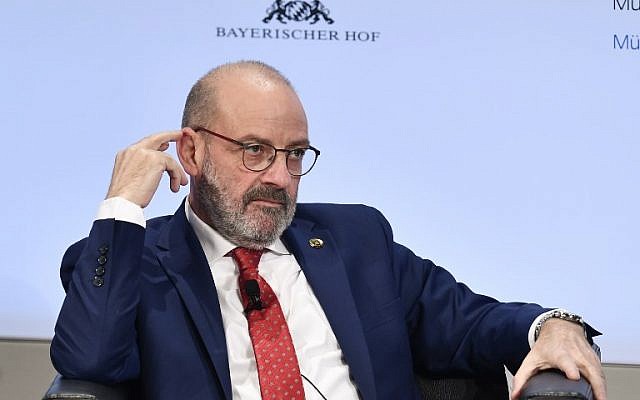 Lebanese Defense Minister Yaacoub Sarraf said his country was prepared to ward off any strikes by Israel on its territories.

Sarraf made the strong-worded comment after Israeli Prime Minister, Benjamin Netanyahu, brandished remnant of Iranian drone saying that his country will act if necessary against Tehran and its proxies, including Lebanese Hezbollah militias.

Sarraf told participants at the Munich Security Conference that he had lived with “an Israeli drone above my head for the past 15 years” but that his country has “no belligerent intent” against anyone.

During his own speech at the Munich conference, Netanyahu slammed the nuclear deal with Iran, saying it has emboldened the regime in Tehran to become increasingly aggressive in the region.

Netanyahu said at the conference, also attended by Iran’s Foreign Minister Javad Zarif, “Well, here’s a piece of that Iranian drone, or what’s left of it after we shot it down. I brought it here so you can see for yourself. Mr. Zarif, do you recognize this? You should. It’s yours.”

Zarif, who addressed the conference later in the day, dismissed Netanyahu’s presentation as a “cartoonish circus, which does not even deserve a response.”