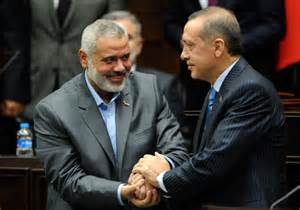 Turkey Friday rejected placement of Hamas Chief on the US blacklist of terrorists, calling the Islamist movement an ‘important reality of the Palestinian political life’.

“It is obvious that this decision, which overlooks the fact that Hamas is an important reality of Palestinian political life, cannot make any contribution to the just, comprehensive and lasting settlement of the Israeli-Palestinian conflict,” foreign ministry spokesman, Hami Aksoy said in a written statement.

“We also hope that the decision will not have a negative impact on our country’s humanitarian assistance and economic development activities towards Gaza.”

US State Department Wednesday issued a statement announcing the blacklisting of Ismail Haniyeh, the overall leader of the Palestinian Islamist movement Hamas. The State Department based Haniyeh’s appearance on the list on his links with Hamas, which itself has been on the US blacklist since 2007.

Haniyeh is also charged for the death of 17 American citizens.

The US decision bans the 55-year old leader to enter the American territory, and freezes his assets in the US if any.
The decision came following President Trump’s December recognition of Jerusalem as capital of Israel and amid ongoing efforts to unify rival Palestinians factions.

The Islamist movement swiftly rejected the US listing of its leader on the terror list, the New Arab reports.
“As if we Palestinians require a certificate of good conduct from America,” said the movement spokesman Hussam Badran.