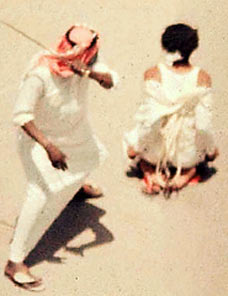 A group of British lawyers launched a campaign to remove Saudi Arabia from the UN Human Rights Council, arguing that Riyadh’s membership of the body is “contradictory and ironic”.

Ken Macdonald and Rodney Dixon are due to submit their report on Saudi Arabia to the Council in Geneva, claiming that the over 60 arrests were “in breach of both Saudi and international law,” media reports said.

The lawyers raised the plight of 60 political activists and peace campaigners who were detained in September last year.

The report also accuses the authorities of “targeting human rights activists, political dissidents and others merely exercising their right to free speech.”

The document concludes that the UN General Assembly “must urgently consider” suspending Saudi Arabia’s membership of the Human Rights Council under a resolution that allows this in case of members that commit “gross and systematic violations of human rights.”

Speaking to Al Jazeera, Dixon said it was “completely contradictory and ironic for a government with systemic patterns of abuse – as we have highlighted in the report – to be sitting on the council, and in fact previously to have chaired the council”.