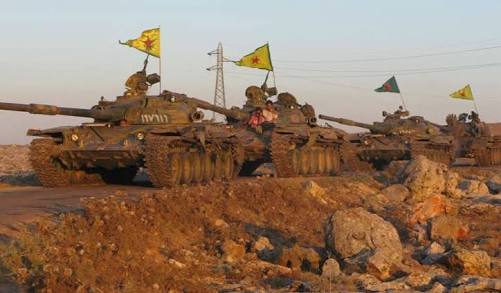 Turkey has reiterated threats to extend its incursion in Syria to the town of Manbij, taking its forces to the edge of the US-backed Kurdish presence in the country’s north-east and raising the specter of a military standoff with Washington.

Turkey has already launched a week ago the Olive Branch Operation targeting the town of Afrin, a stronghold of the SDF forces, predominated by the Kurdish YPG militias.

Turkey has put boots on the grounds in Syria to counter the expansion of the Kurdish forces as they brace for launching a US-backed border force of 30,000 soldiers, a move that angered Ankara which deems the YPG a terrorist group on an equal footing as the PKK militias.

“With the Olive Branch operation, we have once again thwarted the game of those sneaky forces whose interests in the region are different,” Turkey’s President Recep Tayip Erdogan said.

But Turkey’s crackdown on Syrian kurds is already pitting it against Washington with President Trump asking Ankara to de-escalate.

Washington has been a key backer of the Syrian Democratic Forces – where the YPG plays a major role – that have battled the Islamic State group in northern Syria.