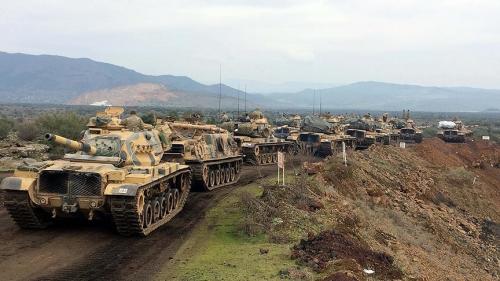 Turkey said it has started a ground incursion of the Kurdish-held territory of Afrin in northwestern Syria in an attempt to block the US-backed SDF Kurdish-Arab coalition from creating an independent state.

The ground offensive, called “Olive Branche,” comes after Turkish jets shelled the city of Afrin, a stronghold of the YPG Kurdish forces in western Syria, which Ankara considers as a terrorist group on equal footing as the PKK militias.

In response, the SDF militias shelled the Turkish province of Kilis across the border. One person was killed and 32 wounded after a missile from Syria struck the Turkish border town of Reyhanli.

“The Turkish army and its Syrian agent factions have not entered one inch of Afrin district inside Syria,” the spokesman of the SDF, which is dominated by the YPG, said.

Turkey is backed in its ground campaign by the Free Syrian Army (FSA), a force of Syrian rebels numbering about 25,000.

According to press reports, Turkey had informed Washington of its plans to hunt Kurdish militias inside Syria.