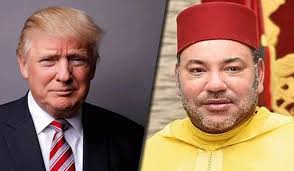 US President Donald Trump has affirmed in a message to King Mohammed VI of Morocco that he shares his views regarding the importance of the holy city of Jerusalem for the followers of the three monotheist religions.

“Jerusalem is and must remain a place where Jews pray at the Western Wall, where Christians walk the Stations of the Cross and where Muslims worship at Al-Aqsa Mosque,” said Trump in a message to King Mohammed VI.

The message came in response to a letter the Moroccan Monarch had addressed to the US President early December, regarding his decision to recognize Jerusalem as a capital of Israel.

In his message, the US president commended the leadership of King Mohammed VI both at the Arab League and in the Organization of Islamic Cooperation (OIC).

On the peace process in the Middle East, Trump said he is “determined to reach a lasting peace agreement between Israel and the Palestinians.”

He also expressed his support “for a two-state solution if agreed by both sides,” adding that the specific boundaries of the Israeli sovereignty in Jerusalem are part of the final status negotiations. “The US does not take a position on boundaries or borders,” Trump stated.

Early in December, King Mohammed VI, in his capacity as Chairman of Al Quds Committee- an offshoot of the OIC- expressed in a letter to the US President his “deep concern and that of Arab and Muslim countries” regarding Trump’s decision to recognize Jerusalem as a capital of Israel and to move the US embassy to the Holy city.

The Sovereign also highlighted the significance of the city of Jerusalem, not only to the parties to the conflict, but to the followers of the three monotheistic religions.

In a message he had addressed to the UN Chief on Trump’s decision, King Mohammed VI had warned that “infringement of the internationally recognized legal and historical status of Jerusalem means one runs the risk of hurling the issue into the quagmire of religious and ideological conflict”.

Such a decision would also frustrate international efforts aimed at bringing about an atmosphere conducive to a resumption of peace negotiations and would ultimately lead to increased strife and tension and undermine all opportunities for peace, not to mention fuel violence and extremism, the monarch had stated, insisting on the need to safeguard the status of Jerusalem as a city of peace and tolerance, “one that is open to the followers of all revealed religions”.

The Monarch had also noted that Jerusalem is a question that concerns the Palestinians – since it is part of their occupied land – as much as it does the Arab and Muslim world, given the fact that it is home to the blessed Al-Aqsa Mosque, the First of the Two Qiblas and the Third Holiest Mosque. “In fact, it is a just cause for all peace-loving people since the city stands as a symbol for tolerance and inter-faith coexistence”.