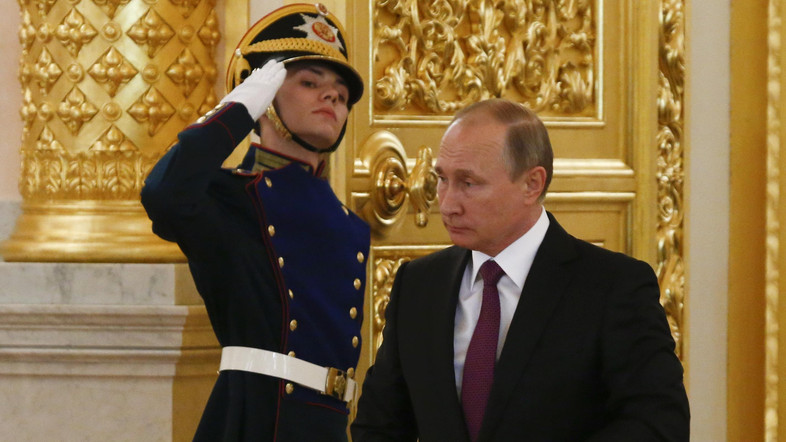 Russian presence in Syria is a showcase of Russia’s military might said President Vladimir  Putin in an address to Russian troops.

Speaking at a Kremlin awards ceremony for troops who fought in Syria, Putin said Russia has “made the main, decisive contribution to the destruction of a criminal group that cast a challenge to the entire civilization.”

He added that IS was seeking to turn Syria into a base for “global aggression” and threaten Russia.

More than 48,000 Russian troops who took part in the Syria campaign were fighting for their “homeland, for a just and fair cause,” said Putin.

The Syrian operation marked the combat debut of an array of new weapons for Russia, including cruise missiles launched from warships, submarines and strategic bombers. The new missiles gave the Russian military a long-sought, long-range precision cruise capability that only the U.S. had before.

Putin also signed a law ratifying an agreement enabling Russia to expand operations at its naval facility in the Syrian port of Tartus.

It could help cement what Putin has said would be a “permanent” Russian presence at the Tartus facility and the Hmeimim air base, key platforms for Russia’s campaign backing the Syrian government in the nearly seven-year war in the Middle Eastern country.

The agreement, signed in Damascus in January 2017, allows the Russian Navy to expand the technical support and logistics facility at Tartus, which is Moscow’s only naval foothold in the Mediterranean.

Moscow helped Assad avoid possible defeat by starting a campaign of air strikes in September 2015, in many cases using Hmeimim as a base. It has also launched strikes from warships in the Mediterranean.