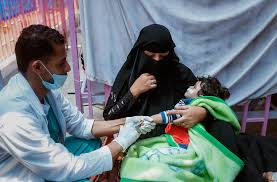 Yemen is witnessing the largest cholera outbreak in the world’s history with nearly 1 million Yemenis having contracted the disease in the past 18 months, the International Committee of the Red Cross (ICRC) reported.

At least 2,226 people are believed to have died of the disease since April, most of them children.

This outrageous statistics add to other figures that show the scale of the humanitarian crisis faced by the country as the result of the infighting and the Saudi-led military campaign.

Airstrikes by Saudi Arabia has killed 10,000. Eight million people — one-third of the population — are teetering on the brink of famine. Eighty percent of the country lacks access to food, fuel, clean water and health care. More than 80% of Yemenis lack food, fuel, water and access to healthcare.

Malnourished children are also at increased risk of dying from infectious diseases. In Yemen, some 1.8 million children are acutely malnourished, including 400,000 under the age of five with severe acute malnutrition.