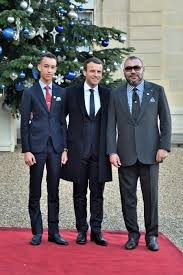 King Mohammed VI, accompanied by Crown Prince Moulay El Hassan, took part in the One Planet Summit held Tuesday in Paris, evidencing thus his own commitment and that of Morocco to protect the environment and fulfill the global climate agenda

His presence in the Summit and his unflinching commitment to the African continent development were highlighted at the opening of this global event, attended by more than 50 world leaders, at the invitation of President Emmanuel Macron.

“We thank HM King Mohammed VI who proved, through his presence in this opening session, his commitment to the climate cause via the organization of the COP22, his leadership for sustainable development in the African continent and an ambitious program for renewable energy development,” said the moderator of the opening session.

The King of Morocco shows just how the climate issue is universal and involves all countries north and south, said the moderator at the opening session, in the presence of President Macron, UN Secretary General Antonio Guterres, President of the World Bank Jim Yong Kim, and other attending Heads of state and delegation.

The moderator also underlined that the presence of Crown Prince Moulay El Hassan is a strong signal of youth’s commitment to defend the future of the planet.

The World Bank Vice-President for Sustainable Development, Laura Tuck, on her part paid tribute to the Monarch and to Morocco for the various initiatives made to gather support for climate action, notably in Africa.
She highlighted in this vein some landmark projects, spearheaded by the Monarch, such as the Adaptation of African Agriculture Initiative (AAA).

“We are delighted to see Morocco take the lead as part of efforts to implement the Adaptation of African Agriculture Initiative [AAA),” Laura Tuck told reporters following talks with a Moroccan ministerial delegation, on the sidelines of One Planet Summit.

The World Bank is taking several innovative measures to improve the management of the agricultural sector with a view to adapting it to climate change and reducing emissions, and in this regard Morocco can play an important role in this area on the African continent, she said.

Since Agriculture is the main victim of climate change in the continent, the Morocco- launched AAA initiative seeks to restore African ecosystem balance and enable the continent countries to have access to climate funds.

In the same connection, Morocco and the World Bank agreed at the financial summit of COP22 to launch the “Green Growth Infrastructure Facility for Africa” tasked to spur green economy on the African continent and pull together environment-friendly private and public investments.

To back Morocco’s climate efforts in Africa and particularly the AAA initiative, the World Bank and the French Development Agency (AFD) decided to partner with the Kingdom through a one million Euro Funding.

The memorandum of understanding on this partnership was signed Tuesday on the sidelines of the Paris summit that highlighted by several pledges and announcements.

Among other moves, the World Bank announced that it will no longer finance upstream oil and gas, after 2019 in in order to “align its support to countries to meet their Paris Agreement goals”.

Bill Gates, Richard Branson and other energy executives and investment fund leaders announced a dozen international projects emerging from the summit that will inject money into efforts to curb climate change.

The projects announced include a program for eight U.S. states to develop electric vehicles, an investment fund for the hurricane-hit Caribbean and money from Gates’ foundation to help farmers adapt to climate change and develop low-carbon technology.

The projects also aim to speed up the end of the combustion engine to reduce the emissions that contribute to global warming.