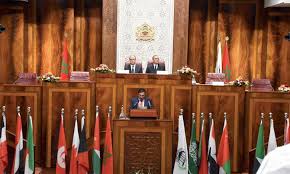 In a joint session held Monday by the two houses of the Parliament, in presence of Head of Govt Saad Eddine El Othmani and Palestinian ambassador to Morocco Jamal Choubki, the MPs denounced the judaization of the holy city and hailed the efforts made by King Mohammed VI, Chairman of the Al Quds Committee, to counter American embassy move to Al Quds.

Before Trump’s announcement, the Moroccan Sovereign sent messages to the UN Secretary General Antonio Guterres and to the US President voicing his “deep concern and that of Arab and Muslim countries” over US dangerous move.

In this message to trump, the King stressed the importance of the city of Jerusalem, not only to the parties to the conflict, but also to the followers of the three revealed religions.

With its unique religious character, historical identity and special political symbolism, the city of Jerusalem “should remain a land as well as a symbol of coexistence and tolerance among all people”, said King Mohammed VI, adding that moving the US embassy to Jerusalem “would have a negative impact on prospects for achieving a just, comprehensive settlement of the Palestinian-Israeli conflict”.

The Monarch had warned that the move, in a region already embroiled in several serious crises, could fuel the feelings of injustice and frustration that extremism and terrorism feed on.

Unfortunately, despite the international community warnings and persistent appeals for common sense, US president went ahead with his plans and declared Jerusalem the capital city of Israel, provoking anger of the Arab and Islamic world and ignited the Palestinian people’s fury.
According to Palestinian politician Hanan Ashrawi, “the peace process is finished”, while French president, Emmanuel Macron said US recognition of Jerusalem was a “threat to peace”.

Commenting US president move, several European writers, musicians and actors condemned in a letter Trump’s announcement, saying his decision will help to further an Israeli agenda to “erase Palestinians as a political and cultural presence from the life of their own city.”

They accuse the Israeli government of subjecting the Palestinian people to “municipal discrimination at every level” and instigating a “creeping process of ethnic cleansing”.

“We reject Trump’s collusion with such racist manipulation and his disregard for international law,” says the artists’ letter, deploring US President’s “readiness to crown the Israeli military conquest of East Jerusalem and his indifference to Palestinian rights”.

As artists and as citizens, “we challenge the ignorance and inhumanity of these policies, and celebrate the resilience of Palestinians living under occupation”, adds the letter.