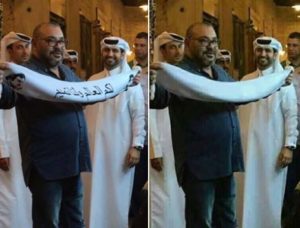 The picture showing King Mohammed VI, who is currently on an official visit to Doha, holding a pro-Qatar sash is fabricated and has never been taken.

The King’s advisor Yassir Znagui has adamantly rejected that the picture was genuine, saying it is just “a grotesque montage”.

Yassir Znagui has firmly denied that the sovereign ever held the sash or allowed anyone to take the picture that has been circulated on social media.

“We are surprised by this image, because it is an image and not a picture. It’s a grotesque montage!” Yassir Znagui told the Moroccan news portal le360.

The Royal advisor who is part of the party accompanying the Moroccan king during his current Gulf tour said, “I was next to His Majesty during all his public appearances during this trip, and at no time did he hold a sash or take a picture with a sash.” For the Royal advisor it is a “grotesque montage”.

The sash was bearing the slogan “You have the world, we have Tamim” that many Qataris have been repeating to express their backing to their ruler since Saudi Arabia, the United Arab Emirates, Bahrain and Egypt cut ties with their country last June.

On its part, Qatar has officially reacted to the incident, deploring the photomontage as unfortunate.

Qatar has opened an investigation to identify the authors of the photoshopping and determine “the party who has tried to mislead public opinion and to undermine the symbols of the States,” said the Qatari government’s chief communications officer Sheikh Saif Bin Ahmed Bin Saif Al Thani.

Underlining that the King’s visit was successful and contributed to deepening and developing the two countries’ brotherly relations, the chief communications officer said “this unacceptable act denotes an attempt to mar Mohammed VI’s visit to Qatar”.

The circulation of the photoshopped picture is underpinned by malicious designs, tending to undermine the excellence of Morocco’s relations with Gulf countries.

King Mohammed VI arrived in Doha last Sunday on an official visit and held talks with Sheikh Tamim on regional and international issues of mutual concern.

Before coming to Doha, the king paid a 5-day friendship and working visit to the UAE at the invitation of Sheikh Mohammed Ben Zayed Al-Nahyan, Crown Prince of Abu Dhabi, Deputy Supreme Commander of the UAE Armed Forces.

The King’s current Gulf tour is seen by analysts as a mediation attempt to defuse tension and help settle the Gulf crisis in light of Morocco’s close strategic partnership with the GCC countries and its neutrality in the rift.

Actually, Morocco, which remains closely linked to Gulf countries in all fields despite geographic distance, had officially announced at the outbreak of the crisis that it has adopted a “constructive neutrality”, “which does not confine it to a passive observation of a disturbing escalation between brotherly countries.”

The Kingdom had also expressed its willingness to mediate in the crisis between the GCC member states, stating that “If the parties wish so, Morocco is ready to offer its good offices conducive to a calm, franc and comprehensive dialog on the basis of non-interference in domestic affairs, the fight against religious extremism, clarity in positions and loyalty in commitments”.

Therefore, King Mohammed VI, who is keen on restoring serene relations between the Gulf brothers, cannot possibly side with any of the conflicting parties with whom he has main-tained close and continuous contact, not to mention the spe-cial ties he has with all the Gulf leaders.