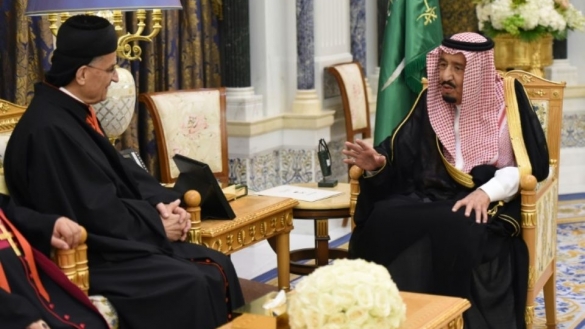 The head of the Roman Catholic Church in Lebanon and in the Middle East arrived in Riyadh Monday in a historic move designed to ease tension between Riyadh and Beirut following the resignation of Lebanese Prime Minister and accusation by Beirut that Saad Hariri has been put under house arrest.

This visit also comes at the moment Riyadh is increasing the pressure on Lebanon to try to isolate the pro-Iranian movement Hezbollah, which is participating in the Lebanese government.

The patriarch and the king “evoked fraternal relations between the kingdom and Lebanon and confirmed the importance of the role of different religions and cultures to promote tolerance and renounce violence,” the Saudi official news agency SPA reported.

Cardinal Bechara Rai then met with Lebanese Prime Minister Saad Hariri, who announced ten days ago his sudden resignation from the Saudi capital and whose fate is the subject of intense speculation.

This is the first visit to Saudi Arabia by a senior Lebanese official since the announcement of the resignation on November 4. Hariri had then denounced, on a Saudi channel, the stranglehold on his country of Hezbollah and Iran, regional rival of Saudi Arabia.

The patriarch Bechara Boutros Rai, who heads the Maronite Church is the first Christian leader to visit Saudi Arabia, the house of two of Islam’s holiest places, and which bans the practice of other religions, since 1975.
Rai heads a community of 900,000 Christians in Lebanon, with followers in Syria, and Cyprus.
If the Patriarch’s visit echoes calls for tolerance and coexistence between Islam and other religions, it also aims at urging the Saudi throne to allow Saad Hariri return home and possibly re-assume office as Prime Minister.
Hariri who also possesses a Saudi citizenship cited, in his resignation announcement, threats to his life and accused Iran and Hezbollah of sowing tension in the region.
Top Lebanese officials, Hezbollah and Hariri’s own entourage have suggested that Riyadh coerced the Lebanese Prime Minister into stepping down. They also believe that he has been put under house arrest.
Speaking to media over the week-end for the first time since his resignation, Hariri denied that his movements have been restricted and indicated that he would soon go back home.
Riyadh has accused Lebanon of declaring war to the kingdom after Lebanese figures finger-pointed Saudi Arabia for Hariri’s resignation.
The resignation trusted the country into political uncertainty turning Lebanon anew into a playground of proxy war between Saudi Arabia and regional rival Iran.
The EU has warned against meddling into Lebanese internal affairs and urged Hariri to return home.
“We appeal first of all to the political forces to focus on Lebanon and what they can deliver to their citizens, Prime Minister Hariri to return to his country and the unity government … to focus on domestic achievements,” said Federica Mogherini, Head of the bloc’s foreign policy, at the end of a meeting in Brussels.
Last week, US Secretary of State Rex Tillerson also warned against using Lebanon for proxy conflicts in the wake of the unfolding crisis triggered by the resignation of Lebanese Prime Minister Saad Hariri as Saudi Arabia and Iran trade accusations over the country.
“There is no legitimate place or role in Lebanon for any foreign forces, militias or armed elements other than the legitimate security forces of the Lebanese state,” Tillerson said in a statement.
“The United States strongly supports the sovereignty and independence of the Republic of Lebanon and of its political institutions,” he added.