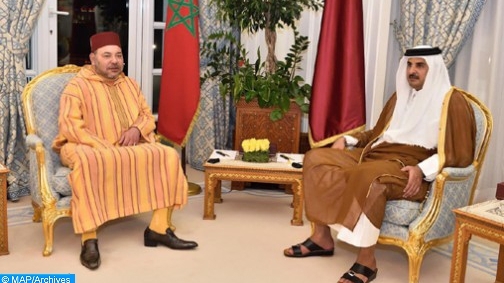 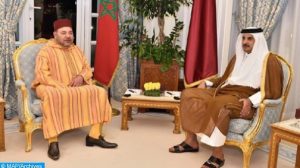 King Mohammed VI is paying an official visit to Qatar against the backdrop of tense ties between Doha on one side and Saudi Arabia, UAE and Bahrain on the other side.

The Moroccan news agency said that the talks raised the “excellent relations between the two brotherly countries and the firm will by the two leaders to further reinforce cooperation in the different areas.”

It added that the two leaders also discussed “regional and international topics of shared interest.”

The visit is seen by analysts as a mediation attempt to defuse tension in the Gulf crisis in light of Morocco’s close strategic partnership with the GCC countries and its neutrality in the rift.

The King’s visit will also give a boost to Morocco’s good offices, which started as soon as the crisis between Qatar and its neighbors outbroke last June. The King has then dispatched foreign minister Nasser Bourita to express support for the mediation efforts led by Kuwait.

The Moroccan foreign ministry had then issued a statement expressing the Kingdom’s willingness to mediate in the crisis between the GCC member states.

“If the parties wish so, Morocco is ready to offer its good offices conducive to a calm, franc and comprehensive dialog on the basis of non-interference in domestic affairs, the fight against religious extremism, clarity in positions and loyalty in commitments,” the statement had said.

Since the outbreak of the crisis, King Mohammed VI maintained “close and continuous contact with different parties,” the statement had said.

Relations between Morocco and Arab Gulf countries gained momentum thanks to the special ties King Mohammed VI has with all leaders of the GCC who invited in 2011 the North African kingdom to join the group. Jordan was also invited to the elite group in a move seeking to propel joint Arab action to counter common regional and international threats.

The Moroccan-Gulf alliances also took shape in the participation of the Royal Armed Forces in the Saudi-led coalition against the Houthi rebels in Yemen.

In April 2016, King Salman, in an address before the first Morocco-GCC summit in Riyadh with the participation of King Mohammed VI, reaffirmed “total rejection” by Saudi Arabia and the other member states of the Gulf Cooperation Council “of any act that may affect Moroccan supreme interests, on top of which the Moroccan Sahara issue.”

At the economic level, Morocco is seen as a stable and attractive destination for Gulf investments. In 2012, four Gulf states – Qatar, Saudi Arabia, Kuwait and the UAE – agreed to provide aid worth a total $5 billion to Morocco over the 2012-2017 period to help the North African country build up its infrastructure, strengthen its economy and foster its tourism sector.