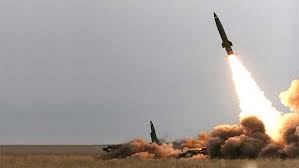 He added that Iran provided the capabilities for the missile, which was fired from Yemen by Shia Houthi militias.

“What we have seen, clearly from the results of the ballistic missile attacks, that there have been Iranian markings on those missiles, that’s been demonstrated,” Harrigian said.

“To me that connects the dots to Iran in terms of who’s providing those missiles and that capability.”

The missile was shot down on Nov. 4 near Riyadh’s international airport. Saudi investigators examining the remains of the rocket found evidence proving “the role of the Iranian regime in manufacturing them.”

Nikki Haley, the US ambassador to the UN, said in a statement on Tuesday that a missile launch in July involved an Iranian Qiam-1, a liquid-fueled, short-range Scud missile variant.

Early this month, Saudi air defense forces intercepted a ballistic missile fired from Yemen over the capital Riyadh, the state news agency had reported. The missile was brought down near King Khaled Airport on the northern outskirts of the city and did not cause casualties, the reports said.