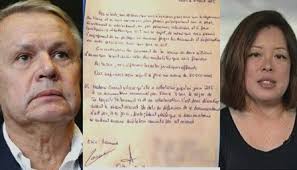 The Court of Cassation, the highest court in France, has acknowledged Friday (nov.10) the validity of two recordings, presented by Morocco’s attorney as a proof of the involvement of French journalists Eric Laurent and Catherine Graciet in the case of extortion and blackmail against Morocco.

The decision of the Court of Cassation has dismissed the two journalists’ appeal to reject the recordings on the grounds that they are “illegal” because they had been conducted with the “indirect participation” of the French investigators “without the consent of the parties concerned”, which “undermined the principles of a fair trial and fairness of evidence”.

The Court of Cassation’s ruling, delivered Friday at the end of a plenary hearing, considered that these two recordings had been made by an emissary of Rabat without the “actual implication” of the French investigators, allowing therefore to conclude to the “loyalty of the proof”.

The ruling is not subject to appeal and the case will now be referred again to the investigating judges.

Patrice Spinosi, the lawyer representing Morocco, described the ruling as “a very great victory” for the Kingdom. “There is no longer any obstacle to the prosecution of the two journalists, a prosecution that will undoubtedly lead to their condemnation for their attempt to blackmail the king of Morocco,” said the lawyer in a statement to the media.

Beyond this case, this decision “enshrines the right of victims to obtain evidence from the moment justice does not,” he added.
Catherine Graciet, 42, and Eric Laurent, 69, are charged with blackmail and extortion.

The case dates back to August 2015, when the two journalists tried to extort three million Euros from the King of Morocco, in return of abandoning the publication of a book supposed to contain embarrassing revelations for Rabat. They held negotiations to that end with Morocco’s attorney, Hicham Naciri, at three separate meetings in Paris.

However, part of the negotiations were recorded and filmed, as Morocco had lodged a complaint against the blackmailers, which enabled to catch them red handed by the French police, which were monitoring the last meeting with the two journalists at a Paris restaurant.

When arrested, the two blackmailers were in possession of €40,000 each as a first payment and had signed a letter setting out details of the instalments to be paid in return for their commitment not to release their so-called damaging book.

The proofs against them are an absolute evidence of their misdemeanor and the Friday ruling by France’s Court of Cassation came to confirm this.