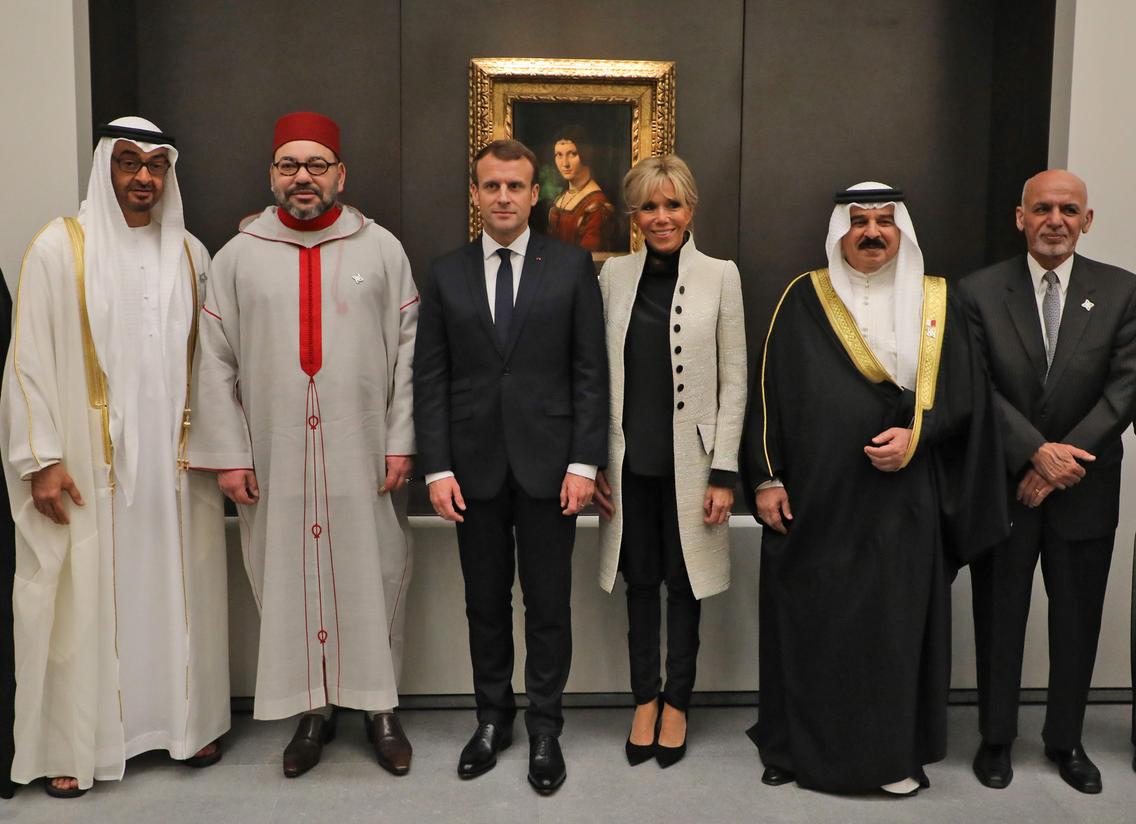 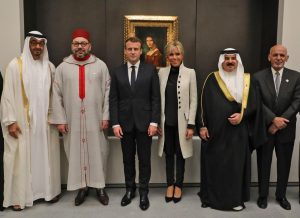 King Mohammed VI who was among the heads of state attending the opening Tuesday of the Louvre museum in Abu Dhabi offered the Museum artworks dating back to the 19th century, namely a Holy Quran manuscript, a rifle, a sword and a cedar wood door from Fez.

Morocco’s King who is on a visit to Abu Dhabi took part in unveiling the Louvre Museum alongside French President Emmanuel Macron, who was accompanied by his spouse Brigitte macron, the King of Bahrain Hamad Bin Issa Al Khalifa President of Afghanistan, Mohammad Ashraf Ghani in addition to UAE rulers and scores of other guests.

Sheikh Mohamed Bin Rashed Al Maktoum, Vice Pres-dent of the UAE and Governor of Dubai, underlined in an inaugural address that the Louvre Abu Dhabi is an additional asset to the human heritage, and that the museum is a work of art that brings together the East and the West.

The message of Louvre Abu Dhabi is that we draw our strength as humans from our interaction… our strength is in our cultural exchange and in learning from each others’ experiences. Our strength is in thinking alike, in amity among peoples and in the alliance of civiliza-tions. The Museum is an inter-civilizational bridge, he said.

A symbol of tolerance and communion, this museum stands for “our capacity to fight evil forces of violence and hatred,” said Sheikh Mohammed Bin Rashid, calling for a genuine inter-civilizational coalition to preserve human civilization.

Echoing him, President Emmanuel Macron said the Louvre Abu Dhabi stands as “a universal museum” which ambitions to fight obscurantism. This “Louvre of desert and light is a bridge between generations, cultures and East and West.”

“By bringing together these masterpieces with other masterpieces from Arab antiquities, Islamic art, pre-Columbian art, and Chinese art, with artists from beyond ages as contemporary artists from Morocco, UAE and China, we are contemplating an epic fresco of civilizations coming together,” said the French president.

President Macron also congratulated the architect of the museum, Jean Nouvel, for having built “a temple for beauty.”

“Beauty builds a bridge between continents and generations,” he said. This museum had a universal message, he added, referring to the UAE’s role as pivotal and at the heart of a region with some of the world’s greatest challenges.

The project was built under an agreement between France and Abu Dhabi in 2007 at the initiative of Sheikh Mohamed Bin Zayed, Crown Prince of Abu Dhabi and Deputy Supreme Commander of the UAE Armed Forces.

Its opening was initially set for 2012 but was delayed because of the global financial crisis and plummeting oil prices, sending the final cost soaring over its original $654 million budget to about $1 billion.

The Abu Dhabi building, topped by a huge silver dome that weighs around 7,500 tons, is designed like an Arab medina (an ancient quarter of a city). It features a geometric structure of 7,850 stars and as the sun passes above, its light filters through the perforations in the dome to create an inspiring effect within the museum known as the “rain of light”, inspired by the palm trees of Abu Dhabi.

First universal museum in the Arab World, the Louvre Abu Dhabi reflects through its 12 galleries (First Villages, First Great Powers, Civilizations and Empires, Universal Religions, Asian Trade Routes, From the Mediterranean to the Atlantic, The World in Perspective, The Magnificence of the Court, A New Art of Living, A Modern World, Challenging Modernity, A Global Stage) the shared history of humankind via the different cultures and civilizations, embodies the dynamism of the contemporary Arab World and celebrates the region’s multicultural heritage.

The new museum, which boasts a permanent rich collection of over 600 artworks ranging from antiquity to present time, in addition to some 300 artefacts loaned from French museums, includes also a temporary exhibition area and other facilities.