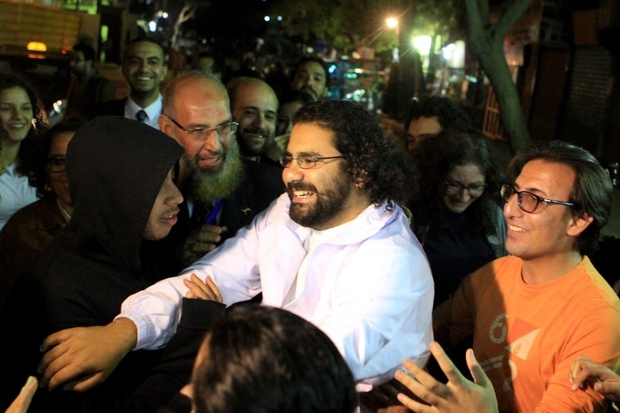 The defendant had been previously sentenced to 15 years in prison for challenging a protest ban in February 2014.

Abdel Fattah, who has already been imprisoned for three years and half in prison, will have to serve the remaining year and half. The court verdict also put him on probation for five years after serving his term.

Aged 35, Alaa Abdel Fattah, is a political activist who stood out for his fight for the independence of the judiciary under autocratic leader Hosni Mubarak.

Known as a leading voice of liberal young Egyptian activists, he made a name for himself in the 2011 revolution that ousted Mubarak.

A previous court ruling sentenced him for 15 years for staging an unauthorized protest in defiance of a 2013 law banning protests not green-lighted by the police.

Abdel Fattah is still facing another charge for insulting the judiciary and a verdict is scheduled for December. If guilty, the activist may be given up to three years in jail.

Abdel Fattah was represented in court Wednesday by his lawyer Khaled Ali, another prominent right activists and critic of President Fattah al-Sisi.

Thousands of activists have been hauled in prison since 2013 on fabricated charges. Some have been subject to forced disappearance.

Al-Sisi’s regime on grounds of the war against terrorism has rolled back the gains of the 2011 revolution, which millions of Egyptians believed would bring prosperity, development and freedom.