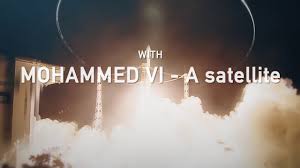 Morocco has entered as of November 8, 2017 the elite circle of countries with space presence with the launch from the space centre Centre in Kourou, French Guiana, of its first earth observation satellite, the Mohammed VI – A Satellite.

The satellite, built by the Thales Alenia Space and Airbus consortium, was separated 55 minutes and 33 seconds after take-off, as it was planned.

It’s a mission success, said the journalist who was commenting the unfolding of the launch operation from Kourou.
Head of the large Moroccan delegation that attended in the space centre the launch operation, Karim Tajmouati, said the Mohammed VI-A satellite is “a pride for the Kingdom of Morocco and for all Moroccans”.
This Satellite, wanted by King Mohammed VI, “is an advanced technological infrastructure that will allow the development of applications with high added value in various areas, said Karim Tajmouati, who is the General Manager of the National Agency for Land Conservation, Cadaster and Cartography (ANCFCC).
“This successful project is undeniably the fruit of a serious, solid and exemplary cooperation between the Kingdom of Morocco and France,” he said.
The satellite was actually built under an agreement signed secretly by Morocco and France in 2013. Its cost is assessed at some €500 million.

A second satellite, Mohammed VI – B, is scheduled to be launched in the course of next year.

This space-based imaging system, piloted from Morocco, will greatly help the country implement its social and economic development strategies, primarily those relating to the agricultural sector, which plays a key role in Moroccan economy.

The spacecraft will enable Morocco to manage better its forestry and pastoral resources, its water resources, in addition to facilitating groundwater prospecting.

The satellite will also strengthen the capacities of national agencies in charge of monitoring road infrastructure, transport networks, and the 3000 km-long coastline, in addition to opening new prospects in the field of spatial planning, the monitoring of housing and construction, and the follow-up of slums eradication operations.

It will likewise offer environmental applications that will help the North African country consolidate its environmental strategy and honor the environmental commitments it made, especially at COP21 and COP22.