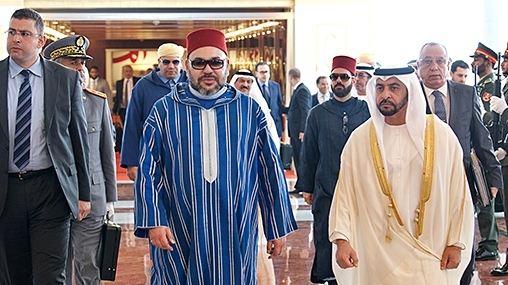 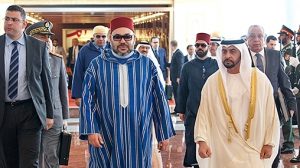 King Mohammed VI of Morocco arrived Tuesday in the United Arab Emirates (UAE) for a friendly and working visit during which he will also attend the inauguration of the Abu Dhabi Louvre Museum to take place on Wednesday.

The Museum inauguration will also be attended by French President Emmanuel Macron.

King Mohamed VI will spend few days in the Emirates, before setting off for Qatar on Sunday for an official visit.

These visits are the king’s first to the region since the outbreak of the Gulf crisis which is opposing Saudi Arabia, the UAE, Bahrain plus Egypt to Qatar.

The Saudi-led camp on June 5 severed diplomatic ties with Qatar that they accuse of supporting terrorism and sidelining with Iran, charges Qatar has vigorously rejected.

Morocco has adopted a neutral position in the crisis and offered to help end the diplomatic spat.

Morocco sent food stuffs to Qatar after Saudi Arabia and its allies cut off air, sea and ground links with Doha.

Last week, Qatari authorities announced plans to establish sea links between the Port of Hamad and North African countries, mainly Morocco, Tunisia, and Algeria, which have not severed ties with the tiny gas-rich country.

The sea route will connect Qatar to Morocco, Tunisia and other Arab countries for the export and re-export of goods from the multi-billion dollar Hamad Port, Qatari authorities said.