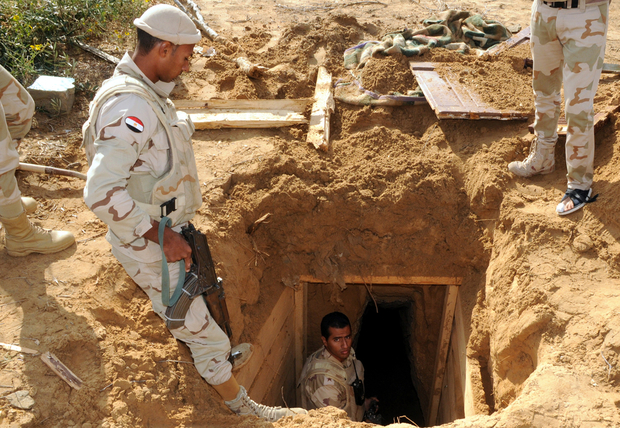 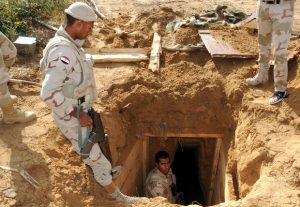 The Egyptian army said Monday it destroyed three tunnels running through the Egyptian border into Gaza, a day after Israel destroyed a tunnel between the Palestinian enclave and the Jewish state killing several Palestinian fighters.

Army Colonel Tamer al-Rifai noted on facebook that the operation occurred in the Sinai near the Rafah crossing linking up Egypt to the Hamas-controlled Gaza.

Palestinians in the enclave have built tunnel networks to skirt around crossing restrictions through the Rafah crossing point, which is the only exit for nearly 2 million people living in the Strip facing an Israeli blockade in place since 2007.

Al Sisi’s Egypt blamed Hamas for using the tunnels to smuggle goods, food, medicine as well as weapons. Cairo also stressed that Islamic State militants fighting its army forces use the tunnels to sneak in and out of the Peninsula to cause mayhem.

Egypt in 2014 set up a buffer zone along its border with the enclave. In the following year, it flooded some tunnels with seawater in a move to eradicate movements in the Sinai.

The army’s announcement came a day after several Palestinian fighters from Hamas and the Islamic Jihad died following the destruction of a tunnel by the Israeli army.

The tunnel, according to the Israeli army, was destroyed from within Israel, near the fence with Gaza.

Tel Aviv said it used ‘breakthrough technology’ to destroy the tunnel running from Gazan city of Khan Younis and crossing into Israel to stop nearly 2 km from the Israeli settlement of Kibbutz Kissufim.