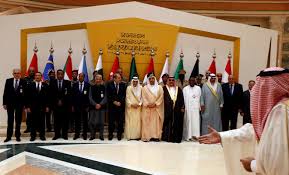 Morocco has renewed its attachment to Yemen’s sovereignty and national unity during a meeting convened Sunday in Riyadh by the foreign ministers and chiefs of staff of member countries of the Arab coalition supporting legitimacy in Yemen.

Speaking during this meeting, SG of Morocco’s Foreign Affairs Ministry Mohamed Ali Al-Azraq stressed the importance of the efforts seeking to reach a political solution to the Yemeni crisis in accordance with UN Security Council Resolution 2216, the Gulf Initiative and the national dialogue.

Al Azraq expressed Morocco’s full solidarity with the brotherly Yemeni people and with the return of legitimacy in this country to end the sufferings of the Yemeni people due to the violations committed by outlawed groups.

He also reiterated Morocco’s full backing to all measures taken by Saudi Arabia to preserve its security and sovereignty and its readiness to support Saudi authorities to protect the sanctity of the holy sites and the two Holy Mosques and to preserve security and stability in the region.

During this Arab meeting, Morocco called for finding appropriate solutions to the Yemeni crisis, which threatens the security and stability of the region, and voiced its readiness to deepen political consultations, military coordination and humanitarian efforts of the Saudi-led Arab alliance.

In a press release issued at the end of their meeting, the Arab foreign ministers and chiefs of staff called upon the United Nations to review its fact-finding tools and mechanisms, in reference to a UN report on the children in armed conflicts.

They rejected parts of this document which contain, according to them, false information and lauded other parts of the report, which hailed measures taken by the Coalition in protecting civilians, said Col. Turki Al-Malki, spokesman of the Coalition Forces in a press conference.

Al-Malki said the Arab meeting strongly denounced the negative role played in Yemen by Iran, through supporting the coup militias with weapons, ammunition, ballistic missiles and mines, which represent flagrant violations of the Security Council Resolution no. 2216. The Iranian regime and its machinery are responsible for destabilizing the security in the region, he said.