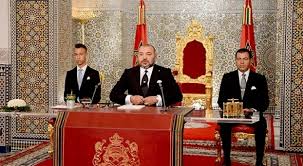 King Mohammed VI has lambasted the Moroccan service civil for its poor governance and weak performance pointing out that many civil servants do not have the skills, qualifications or ambition required, a fact that hampers the materialization of the country’s ambitious development programs.

In a strong-worded speech delivered Saturday on the occasion of Throne Day, King Mohammed VI, pointed out that Morocco has been constantly developing, that progress is clear and real and that it is recognized across the board and in all sectors. “Today, however, we are witnessing glaring paradoxes that are hard to understand or accept,” he deplored.

“On the one hand, Morocco enjoys indisputable credibility at continental and international levels, the esteem and consideration of our partners and the confidence of major investors, such as the Boeing, Renault and Peugeot groups. But on the other hand, we are shocked by the end results, the facts on the ground and the modest achievements made in certain social sectors, so much so that it is shameful to admit we are actually talking about present-day Morocco,” the Monarch said in his speech, delivered, at a peak viewing time, on the eve of Throne Day, celebrated on July 30.

The Throne Day speech is traditionally devoted to drawing the balance sheet of achievements completed the previous year and presenting the roadmap for future plans and projects. It also expounds the country’s foreign policy and standpoint on topical regional and international issues. This year, however, the tone is different and the content is as different. It sends a clear-cut message to officials and civil servants as well as to political parties and their officials and elects that their work is not satisfactory, that they lack a sense of responsibility and national commitment.

Deploring that a number of the successful, human and local development programs, which have a positive impact on citizens’ living conditions, do no match Morocco’s ambitions, the Monarch said the poor results in many sectors, are “mostly due to the inadequacy of joint action, the lack of a national, strategic dimension, inconsistency instead of harmony, disparagement and procrastination instead of entrepreneurship and concrete action”.

King Mohammed VI drew a parallel between the private sector, which he described as “efficient”, “competitive”, and “attracting the best human resources” and the public sector, particularly the civil service, which is suffering from poor governance and weak performance. He pointed out in this regards that many civil servants lack skills, qualifications or the ambition required. “Moreover, they are not always guided by a sense of responsibility”.

“One of the problems which impede Morocco’s progress is the weakness of the civil service, be it in terms of governance, efficiency or the quality of the services provided to citizens,” he insisted, mentioning as an instance the regional investment centers, which are – with the exception of one or two – a problem. “They impede the act of investing instead of serving as a mechanism that provides incentives and resolves the problems of investors at the regional level, without their having to go to central government departments”.

“This has an adverse impact on regions that are suffering from insufficient – sometimes inexistent – private investment and from the public sector’s weak performance. This, in turn, affects citizens’ living conditions,” he explained, underlining that “the challenge is even more daunting in regions with the biggest shortage of health, education and cultural services, not to mention the lack of jobs”.

Calling for greater cooperative efforts to close gaps and help these regions catch up with the others, which have a vibrant private sector that boosts economic dynamism and creates wealth as well as jobs, King Mohammed VI pointed out, in a scolding tone, that in order “to put an end to this situation, governors, caids, directors, staff members, local officials, etc. should work hard, just like staff in the private sector – or even harder”.

“They should show a sense of responsibility that does credit to the civil service and yields concrete results since these officials are entrusted with serving citizens’ interests”.

King Mohammed VI also pinpointed political parties for failing to assume their responsibility and for their practices that induce a number of citizens, especially young people, to shun the country’s political life.

“The evolution witnessed in Morocco in the political domain and in the area of development has not led to the kind of positive reaction you would expect from political parties, leaders and government officials when dealing with the real aspirations and concerns of Moroccans,” he said.

“All in all, our development policy choices remain sound. The problem lies with mentalities that have not evolved as well as with the inability to implement projects and to innovate,” he stressed.

“One may come up with the most efficient development model and the best plans and strategies but, without a change in mentality; without having the best civil servants; without the political parties choosing the best elites that are qualified to run public affairs; without a sense of responsibility and national commitment; one would not be able to offer all Moroccans the free, dignified life one wants them to have”.

Pointing out that this situation can no longer be tolerated because the homeland’s interests and those of the citizens are at stake, King Mohammed VI stressed the need to apply rigorously the provisions of the second paragraph of Article 1 of the Constitution, which links public office with accountability.

“It is high time this principle were implemented in full. Just as the law applies equally to all citizens, it must be applied, first and foremost, to all officials, without distinction or discrimination, and in all of the Kingdom’s regions,” he stated in a firm tone, announcing “This is the dawn of a new era in which there is no difference between officials and citizens as far as civic rights and obligations are concerned; nor is there room for shirking responsibility or avoiding sanctions”.

“Morocco must come first: before political parties, before elections and before senior positions,” the Monarch insisted.