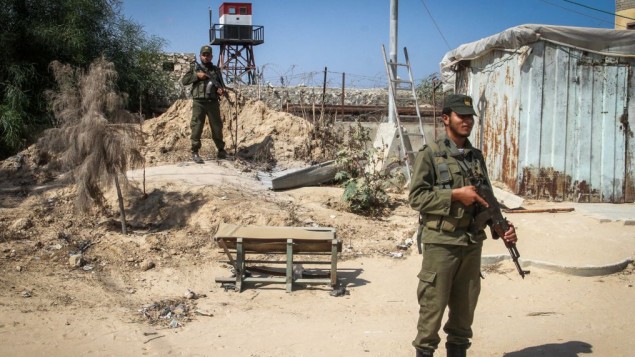 Hamas movement ruling the Gaza Strip began Wednesday construction of a safe area at its border with Egypt as part of agreements for rapprochement between the Islamist movement and Cairo.

The new buffer area will stretch on 12 kilometers, along the Southern border between the Gaza Strip and Egypt. The close-of military zone will be 100-meter wide, and will be equipped with surveillance cameras, observation towers and lighting, reports say.

The new arrangement comes as the Islamist movement renews ties with Cairo while power shortage in the enclave pushes it against the wall.

“It will be a closed military area and therefore it will be easier to oversee the border and prevent smuggling of drugs and infiltrators,” said Tawfiq Abu Naim, the deputy interior minister of Hamas.

“These measures come in the context of the productive recent visit of the security delegation to Egypt and the understandings reached in this context,” he added.

A Hamas high key delegation, led by leader Yahya Sinwar, spent several days in Cairo for talks with Egyptian officials early this month on improvement of security at the border and humanitarian aid to Gaza as Israel and rival Fatah tighten grip around the movement with reduction in power supply.

The UN and 16 Israeli NGOs said if the power supply restriction continues, it will cause a catastrophe in the enclave, under Israeli siege for a decade.

Cairo agreed to ease control of the Rafah crossing and provide assistance against a number of demands including cease of smuggling activities, information on tunnels, cease of collaboration with the Islamic State group (IS) militants in the Sinai and handover of 17 men wanted in Egypt for terror related charges.

Cairo has also supplied Gaza with millions liters of fuel to be used for the only power plant of the Strip. The plant has ceased working since April after Hamas refused to buy fuels from Palestinian authority led by rival Fatah; in the West Bank. Hamas accused Mahmoud Abbas of hiking the fuel price.