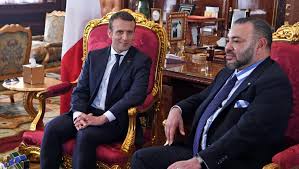 King Mohammed VI and French President Emmanuel Macron, who started a friendship and working visit to Morocco Wednesday (June 14), examined the ongoing Gulf crisis at the meeting they held shortly after the French President’s arrival in Rabat.

It was natural that the talks covered the Gulf crisis as both leaders hope to unite their mediation efforts and seek to avoid escalation.

At a news conference he held after his talks with the Moroccan Monarch, the French President welcomed the convergence of views between Rabat and Paris on this issue. “The king of Morocco shares our concern: France wishes that countries will talk again and that the Gulf remains stable, also because these states are stakeholders in the Syrian and Libyan crises ,” Macron said.

“The King of Morocco has spoken with several protagonists. I myself spoke with all the leaders of the region,” said the French president, who chose Morocco for his first trip to the Maghreb.

Since the outbreak of the crisis, King Mohammed VI has maintained close and continuous contact with the different parties involved in the crisis and offered Morocco’s good offices to reach a calm, franc and comprehensive dialog.
Part of his efforts to help ease the current tension between Qatar and its neighbors, the King dispatched Foreign Minister Nasser Bourita as his special envoy to several Gulf countries.

The French Presidency had announced that President Macron held talks over the phone with all the heads of state in the region and called for appeasement. These efforts are convergent with the role of mediation that Morocco wants to play, the Elysée said, adding that both leaders are eager to coordinate their actions to be as efficient as possible.

The Elysée also announced that President Macron would be receiving before the end of the current month the Emir of Qatar and Sheikh Mohammed bin Zayed Al Nahyan, the Crown Prince of Abu Dhabi and Deputy Supreme Commander of the UAE Armed Forces.

“There is a great convergence of views (between France and Morocco) on this Qatari issue. The priority is to help resolve the crisis,” a French diplomatic source was quoted by AFP as saying.

Saudi Arabia, the UAE, Bahrain and Egypt broke off diplomatic ties on June 5 with Qatar, for the Emirate’s alleged support of terrorism and for moving closer to Shi’ite Iran, the regional archrival of the Sunni Gulf rulers.

They banned their airspace and imposed restrictions on trade and movement of persons, with Saudi Arabia closing its land border with Qatar.

Talks between King Mohammed VI and President Macron also covered, besides bilateral partnership, the Libyan crisis, as Morocco is very involved in monitoring the situation, and as France wants to push its diplomatic efforts in the coming months.

At his news conference, President Macron said that Paris and Rabat have a shared resolve to find means to stabilize Libya.

The fight against radicalization and terrorism featured high in the talks in addition to the situation in the Sahel, where France is seen as a stabilizing player.

The two leaders also reviewed their countries’ policies in Africa and President Macron hailed in this regards Morocco’s growing role in the continent.