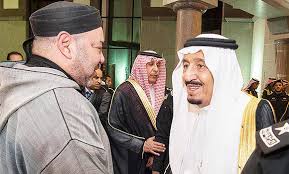 Morocco, which has been following with great concern the deterioration in relations between Saudi Arabia, the United Arab Emirates, Bahrain, Egypt and other Arab countries on the one hand and Qatar on the other has offered its good offices to defuse the tension.

“If the parties wish so, Morocco is ready to offer its good offices conducive to a calm, franc and comprehensive dialog on the basis of non-interference in domestic affairs, the fight against religious extremism, clarity in positions and loyalty in commitments,” the Moroccan Foreign Ministry said in a statement released Sunday.

The crisis erupted last week after Saudi Arabia, the UAE and Bahrain, all three member of the Gulf Cooperation Council, and their allies in the Arab World and Africa severed ties with Qatar, which they accuse of supporting terrorism and siding with Iran.
Besides severing ties with the tiny gas-rich country, the bloc banned all air, land and sea transport with Doha.

Since the outbreak of the crisis between the Gulf countries, “King Mohammed VI has maintained close and continuous contact with the different parties to the crisis”, the statement said.

“Given the strong personal ties of sincere fraternity and mutual esteem between HM King Mohammed VI and his brothers Kings and Emirs of the Gulf countries and taking into account the unique strategic partnership existing between Morocco and the GCC states, Morocco made sure not to indulge in public statements and hasty stands that would only widen the rift and deepen grievances,” the statement added.

King Mohammed VI has thus called on all parties to show restraint and wisdom in order to defuse tension, overcome this crisis and definitely settle the causes that led to it, in accordance with the spirit, which has always prevailed within the GCC, the Foreign Ministry underlined.

“Morocco, which is strongly linked to the Gulf countries in all fields, is very concerned by this crisis, although it is geographically distant and although it is not directly involved in the row, the statement said, insisting that the North African country has adopted “a constructive neutrality” that does not confine it to a role of a passive observer of a disturbing escalation between sisterly countries.

Therefore, “If the parties wish so, Morocco is ready to offer its good offices…” and expresses hope that “this holy month of Ramadan will inspire everyone to the spirit of solidarity and concord needed to overcome the current divergences so that the GCC remains a model of regional coordination and a driving force of Arab action,” the statement said.