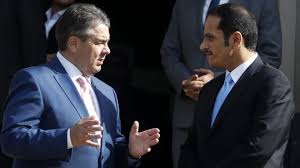 Germany Friday urged Saudi Arabia-led clique to end the blockade they have imposed on Qatar and urged both sides to find solution through diplomacy.
Receiving his Qatari counterpart in Wolfenbuettel, a town in Lower Saxony, German Foreign Minister Sigmar Gabriel indicated that a solution could be attained through diplomacy adding that Germany is ready to mediate alongside the US.
“Along with our American colleagues but above all our colleagues in the region, we must try to find solutions, especially lifting the sea and air blockades,” Gabriel told reporters.
“We are convinced that now is the hour of diplomacy and we must talk to each other,” he added, cautioning against further escalation of the crisis.
Saudi Arabia, United Arab Emirates (UAE), Bahrain are leading a group of Arab and Muslim countries, which have severed diplomatic ties with Qatar over charges that the tiny gas-rich country sponsors terrorism and threatens their internal security.
Saudi Arabia, UAE, Bahrain and Egypt imposed air and sea blockades. They have also ordained all Qataris to leave their soil in 14 days.
Kuwait and several other countries have been trying to mediate the crisis. Wednesday, US President Donald Trump offered to help end the standoff.
Thursday, the State Department indicated that US Secretary of State Rex Tillerson is ready to help. The US official was former chief executive officer of Exxon Mobil and dealt with Qataris over the years.
Russia called for talks to resolve the confrontation. “We believe any differences should be resolved at the negotiating table to eliminate concerns and unite forces against the main threat in the region, terrorism,” Russian Foreign Minister Sergei Lavrov told reporters in Moscow on Wednesday.
“Any escalation in the region, which is already afflicted by various conflict situations, is a matter for concern”.
Earlier on Tuesday, President Vladimir Putin spoke by phone with Qatari Emir Sheikh Tamim Bin Hamad Al Thani and Egyptian President Abdel Fattah el-Sisi.