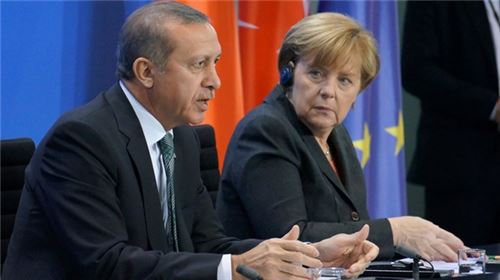 Visiting German Chancellor Angela Merkel on Thursday held a meeting with President Erdogan in Ankara, in a bid, among others, to warm up bilateral relations affected by the failed July 2016 coup d’état.

At the joint press conference that followed the meeting, there were signs that the two leaders had different opinions on the constitutional revision in Turkey and the denomination to use to describe extremist groups claiming to fight under the banner of Islam.

Commenting on the constitutional amendments, which would turn the office of the president from a ceremonial office to an executive presidency, if approved in a referendum, Chancellor Merkel noted that Turkey is going through “a phase of deep political change.” She stressed that “everything must be done to preserve the separation of powers and above all, freedom of opinion and the plurality of society.”

Her remarks were rebuked by Erdogan as he replied that “there’s not an ounce of truth to this” because the country has legislative, executive and judicial organs.

Critics fear that the approved constitutional reforms would give too many powers to the president to trespass the competencies of other organs of the state.

The two leaders also spoke “in detail about… the questions of the fight against Islamist terrorism, against every form of terrorism, and also the terrorism of the PKK” according to Merkel who said they have agreed to cooperate.

Erdogan however pointed out his dismay over the use of “Islamist terrorism” by the German Chancellor as he explained that “such an expression is not correct because Islam and terror cannot be associated” because Islam means peace. He added that its use is “saddening” to Muslims. “Please let’s not use it. As long as it is used we need to stand against it. As a Muslim president personally I cannot accept that,” he said.

Merkel answered that Germany makes a linguistic distinction between “Islam” and “Islamist.”

Turkey accuses Germany of not being helpful in fighting terrorism after Berlin failed to its extradition request of 40 soldiers said to be involved in the July failed coup and not rejecting asylum requests of alleged FETO members said to be behind the plot.